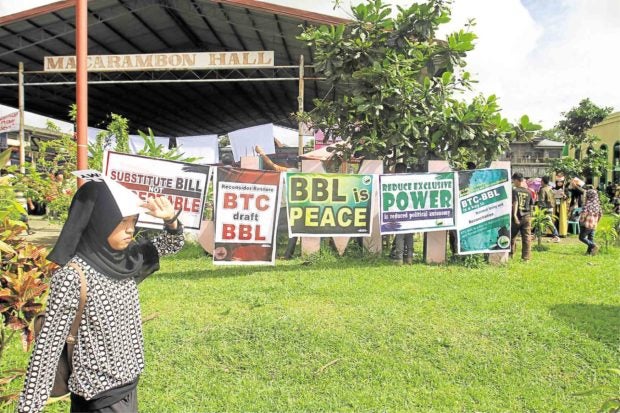 SUPPORTING BBL Placards supporting the original version of the Bangsamoro Basic Law are displayed in Marawi City during a peace gathering organized by civil society groups in Mindanao. —RICHEL UMEL

MARAWI CITY — Civil society groups in Mindanao expressed alarm over Congress’ version of the Bangsamoro Basic Law (BBL), which reduced the power of Bangsamoro, the proposed political entity set to replace the Autonomous Region in Muslim Mindanao, in the peace agreement between the government and the Moro Islamic Liberation Front.

The groups, whose members and supporters gathered at Jamiatu Muslim Mindanao quadrangle at Barangay Matampay here on Wednesday, called on Congress to make sure that the final version of BBL jibed with what was agreed upon in the Comprehensive Agreement on the Bangsamoro.

This would prevent the possible rise of breakaway groups that would “capitalize” on the Moro people’s dissatisfaction over the fate of the peace accord, they said.

More than 18,000 people, some of them bearing placards which read, “Peace, not war,” “Original BBL” and “BBL BTC (Bangsamoro Transition Commission) version,” attended the peace rally here on Wednesday.

The groups, which included Ranaw Multisectoral Movement, Coalition of Moro Youth Movement, Ranao Confederation for Peace, and Bangsamoro National Movement for Peace and Development, also called on Congress to pass the original version of the BBL.

Hundreds of families, who were displaced during the Marawi City siege and were still staying in the evacuation centers and tent cities, also joined the peace rally.

In a statement, the groups said the new BBL version in Congress already deviated from the version drafted by the Bangsamoro Transition Commission.

They said the latest version would only create a “weak mirror image” of the ARMM, the political entity it was to replace, supposedly to strengthen Moro autonomy. 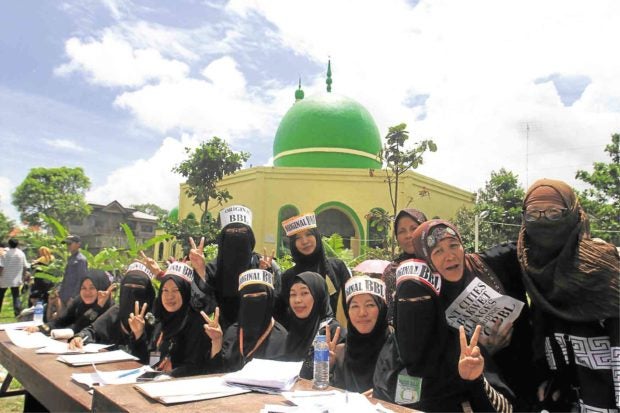 “We note sadly that both houses [of Congress], should they persist in their revisions, will fail to replace the weak autonomous government with a strong autonomous government. We fear that the resulting autonomy law for the Bangsamoro will lose the essence of meaningful autonomy,” they said.

The groups appealed to members of the bicameral conference to consider restoring the deleted or transferred power of the Bangsamoro autonomous government.

They highlighted six points in their appeal, among them, for Congress to restore the original version of the BBL on inland waters, which should be placed under the exclusive power of the Bangsamoro.

They also wanted Congress to restore the original provisions of House Bill No. 6475 on the power of the Bangsamoro government to regulate power generation, transmission and distribution that would be operated exclusively in the Bangsamoro and not to be connected to the national transmission grid.

They also wanted the original provision of the bill on the share in the national taxes collected in the Bangsamoro and on the provision on the periodic plebiscite.

“In the event that it is impossible to restore the original provision of the bill on the core territory of Bangsamoro, (we ask Congress to) adopt the version of the Senate on the provision of core territory, particularly on the six towns of Lanao del Norte, so that it would no longer require the consent of the whole province,” they said.

“We ask Congress to reconsider the wisdom of building a strong autonomy for the Bangsamoro as the only key to achieve national peace and solidarity,” they added.

The groups said strong autonomy should not be viewed as threat to national sovereignty but as the “most decent and noble gesture” to allow a sovereign people to live as a “self-governing entity” within the sovereignty of Philippine state.

“Together, we cannot afford another ‘failed experiment,’” they said, referring to the ARMM. “If we do not build a strong autonomy, but merely add or change a thing or two weak provisions to an entity that might as well be the same old ARMM, we will only be courting disaster,” they said.

“We cannot afford to unjustly frustrate a long-hopeful, long-suffering people and not expect to see them take extreme violent actions,” they added.