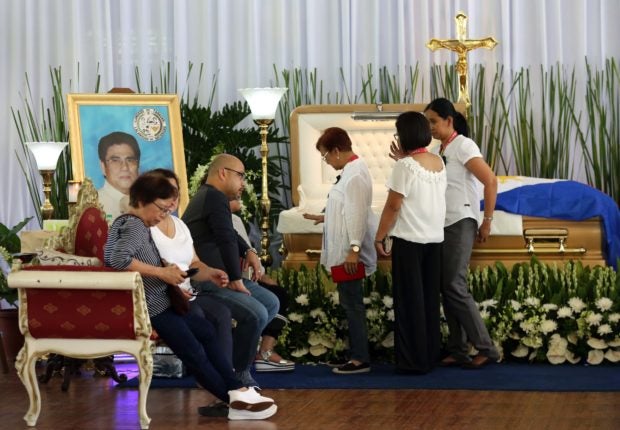 Sympathizers at the wake of Tanauan City Mayor Antonio Halili held in the family compound in Barangay Sambat, Tanauan City, Batangas. In photo is the mayor’s son Mark Anthony (dark shirt, 3rd from left) and other relatives. INQUIRER PHOTO/LYN RILLON

TANAUAN CITY – A reenactment of the killing of Tanauan City mayor Antonio Halili showed that the gunman was on a higher ground when he took the shot.

Chief Supt. Edward Carranza, chief of the Calabarzon police, said the gunman was 4.1 meters high from the ground and the shot was fired at an aerial distance of 76.8 meters from Halili.

With the use of a range finder, police measured the gunman’s distance from Halili, who was then standing together with city government employees in singing the national anthem during Monday’s flag raising ceremony.

Investigators on Thursday morning recovered an empty shell of a 5.56-mm bullet from the hill where the gunman, supposedly down on the ground and concealed by tall grasses, was.

A 5.56-mm bullet, usually used for an M16 rifle, was recovered from Halili’s body during the autopsy.

Caranza said the empty shell would be subjected to cross-matching to determine the firearm used and possibly trace its owner.

But if it turns out that the gun or the bullet had no records with the police, “that’s going to be a problem,” Carranza said.

Carranza clarified earlier police pronouncements that the assailant could be a trained sniper and that he was about 150 meters away from the target.
Otherwise, he said, a sniper would have aimed for a head shot and not the body.

Halili died from a single bullet wound that hit his chest.