The Gabriela party-list condemned as “despicable” the strip search on drug suspects inside a Makati City police station, saying it was another form of “police abuse” under the Duterte administration.

A television report earlier showed a video of naked drug suspects, who were even asked to bend over before smiling police officers. The video was reportedly taken sometime in March 2017. 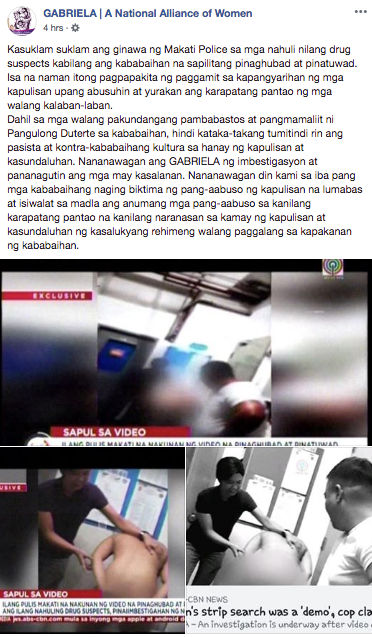 (What the Makati Police did to captured drug suspects, including a woman who was forced to go naked and lean down, was utterly appalling.)

(This is another demonstration of policemen using their authority to abuse and undermine the rights of the people who are helpless.)

Gabriela blamed President Rodrigo Duterte’s “disrespectful” remarks against women for the inflamed culture of violence and abuse in the uniformed forces of the country.

(Because of President Duterte’s blatant disrespect and condescending remarks against women, it comes as no shock that the fascist and anti-women culture in the ranks of the police and military would also worsen.)

Gabriela then called on authorities to investigate the incident. The group likewise encouraged other women subjected to police abuse to come