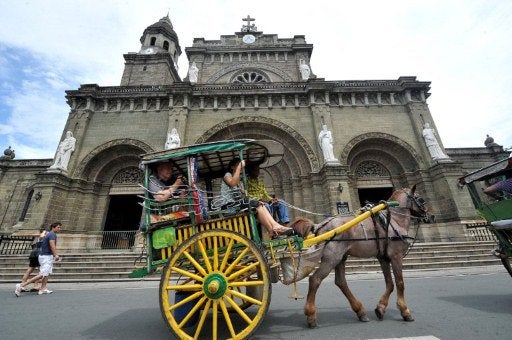 President Rodrigo Duterte on Wednesday slammed what he described as the “creeping influence” of the Church that derails government programs.

Duterte, who appeared to be breaking his promise to keep silent regarding his rift with religious groups, said many of the Church’s beliefs run counter to the policies of the government, citing hurdles in the implementation of the family planning in the country.

“Yesterday, I read somebody said that we have to implement the family planning. To be frank, the family planning, with due respect, I don’t want to pick a fight, it has something to do with the objection of religions, not all,” he said in a speech during the 31st anniversary of the Department of Environment and Natural Resources (DENR) in Quezon City.

“I would not mention the faith because again I do not want to quarrel with them,” he added. “You will not get anything from these fools, they are all talk.”

Though he did not mention any specific religious group, the Catholic Church has repeatedly opposed the government’s implementation of the Reproductive Health Law.

“That is why one of my reasons why I do not like itong [this] creeping influence of faith that sometimes run counter to what government believes to be good for the people, at least in this temporal life,” Duterte said.

He slammed the “hypocrisy” of the Catholic Church, recalling how he was allegedly molested when he was a teenager studying at the Jesuit-run Ateneo de Davao University.

“It’s because too much influence kaya talaga ako pumapalag because I have a history of it, so I know the hypocrisy,” he said.

Duterte’s fresh tirades against the Church came days before he was set to meet Catholic Bishops’ Conference of the Philippines (CBCP) President Romulo Valles in Malacañang on July 9.

His meeting would come after he earned the ire of religious groups when he ranted about a “stupid God” and questioned the creation theory in the bible.

He said the Church has been at odds with him even before the elections.

“Not now, even before the elections. I was the bad guy. Until now. I was already fed up, that’s why I lashed back at them. Now that I am firing back, I would be rude. And my mouth is really rude, even before,” Duterte said, citing he “grew up in a slum area before God gave us a little break in life.” /jpv