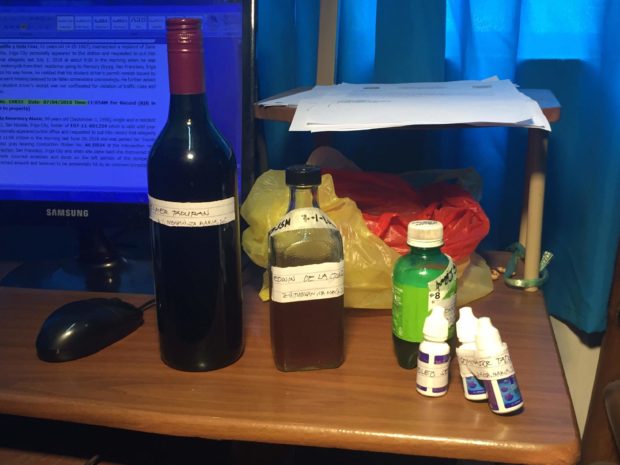 The items recovered by the police for testing by the Food and Drugs Administration.
PHOTO BY STEPHANIE FLORIDA/INQUIRER SOUTHERN LUZON

IRIGA CITY – Four people died, while 50 were closely being monitored, after allegedly drinking a local whiskey in this city, police said Wednesday.

Local resident Dominador Taduran, who was interviewed by the Inquirer, said the man was convincing him to sell his products called “Re-mineralizing drops.”
He said the man, whose driver was from the same village, offered a drinking spree as consolation (pa-consuelo) to the people in the neighborhood.

“He mixed the drink in the pitcher inside his car, that is why we have no idea what it was,” he said. 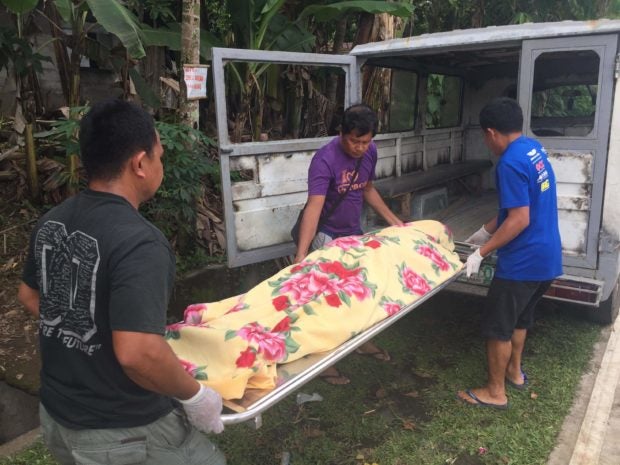 The body of Sonny Castillo, being brought to the funeral parlor for autopsy in Iriga City.
PHOTO BY STEPHANIE FLORIDA/INQUIRER SOUTHERN LUZON

Relatives of those who died said the victims vomited and felt extreme heat after drinking the whiskey.

The latest casualty, Sonny Castillo, 47, died before dawn Tuesday. Police were still investigating the incident, while the four victims were brought to the funeral homes for autopsy.

The police also recovered the products allegedly used by the man in mixing the drink and it would be brought to the Food and Drug Administration for tests.

Police were still looking for the man, who was still at large as of Wednesday.