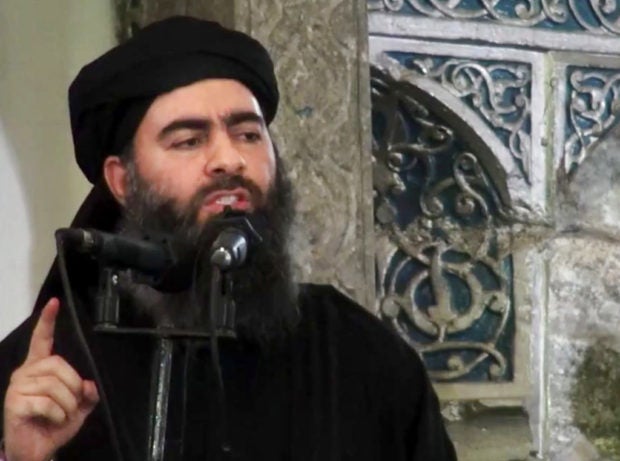 This file image made from video posted on a militant website July 5, 2014, purports to show the leader of the Islamic State group, Abu Bakr al-Baghdadi, delivering a sermon at a mosque in Iraq during his first public appearance.  AP FILE

BEIRUT, Lebanon – Hudhayfah al-Badri, son of Islamic State group leader Abu Bakr al-Baghdadi, was killed during an attack by the jihadists in the central Syrian province of Homs, the IS propaganda agency Amaq announced Tuesday.

Al-Badri was killed in an “operation against the Nussayriyyah and the Russians at the thermal power station in Homs,” the group said in a statement alongside a photo of a young man holding an assault rifle.

Nussayriyyah is the term used by IS for the Alawite religious minority sect of President Bashar al-Assad.

IS declared a cross-border “caliphate” in Syria and Iraq in 2014, seizing a third of Iraq during a sweeping offensive.

The jihadists have since lost much ground to separate counter-offensives by Syrian and Iraqi forces as well as US-led operations, and the jihadist presence is now confined to a few holdouts.

The Islamic State group is estimated to control no more than three percent of Syria’s territory.

Last December the Iraqi government declared victory over IS but the military has continued regular operations targeting mostly desert areas along the porous Syrian border.

The group’s leader Baghdadi, who has been pronounced dead on several occasions, remains alive in Syrian territory by the Iraqi border, an Iraqi intelligence official said in May. Baghdadi was said to move around with only a small group of followers

Originally from Iraq, Baghdadi has been dubbed the “most wanted man on the planet” and the United States is offering a $25 million reward for his capture.

The Iraqi official said the noose was closing around the jihadist leader after Iraqi forces captured five top IS commanders in an unprecedented raid in Syria on March 24.

Last September, in the last voice message attributed to Baghdadi, the IS leader called on his fighters in Syria and Iraq to “resist” their enemies.

He had four children with his first wife and a son with his second wife. /cbb