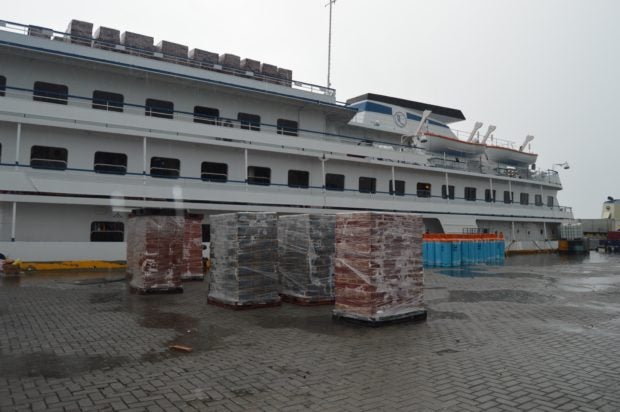 ORION, Bataan — Authorities have stopped a ship from sailing off to Micronesia with 139 Filipinos who were allegedly illegally recruited to work abroad, many of them with expertise in making “lechon” (roast pig).

National Bureau of Investigation agents boarded the MV Forever Lucky before dawn on Tuesday, hours after it was held at the port of Orion in Bataan province by Philippine Coast Guard (PCG) personnel.

The agents confirmed that the job recruits had no documents that allowed them to work abroad, such as in the US territory of Guam.

Quoting information from the Office of the President’s National Coast Watch Center, PCG spokesperson Capt. Armand Balilo said the ship’s crew carried fake documents and the vessel, owned by Fahrenheit Co. Ltd. (FCL), did not have a special permit to navigate from the Maritime Industry Authority.

FCL, which was also the suspected job recruiter, is registered in the Subic Bay Freeport Zone and is now being investigated by the Subic Bay Metropolitan Authority (SBMA), according to SBMA chair and administrator Wilma Eisma.

“However, we are not aware of said company’s operations that involve the mass recruitment of workers, as well as transportation of the same to any destination, foreign or domestic,” she said in a statement.

PCG Bataan commander Lt. Carlos Carlos said the ship was stopped from leaving the port on Monday night because its 139 passengers failed to show any foreign employment papers.

“We noticed that the ship was carrying passengers. We were informed the ship was merely undergoing repairs there,” Carlos said. The vessel had been anchored off Orion for almost a year before it entered the port last month.

The recruits came from southern and central Luzon provinces. A woman from Cavite province, who requested anonymity, said she learned about the job openings from the school where she was assigned for on-the-job training.

Raymart Bibel, 29, a jobless college undergraduate from Catanauan town in Quezon province, said he was hired to prepare lechon for a sports event in Guam where the Filipinos were to prepare and serve meals.

He added that the pigs for roasting were packed in the ship’s freezers.

News about the Micronesia job openings for cooks, entertainers and waiters spread like wildfire, but Bibel said many qualified because they knew how to prepare lechon.

He said he was told by someone whom he did not identify to just bring his passport. “We were not asked to pay any recruitment fee,” he added.

Lito Hernandez, 44, from Quezon said he boarded the ship days earlier. It was scheduled to leave Orion at 9 p.m. on Monday but was delayed to await a cargo of charcoal.

The ship was loaded with food provisions good for two months, he said.

Gerald Geralde, who headed an NBI special task force, said 200 people were recruited but only 139 showed up at the Orion port.

The 5,746-ton cruise ship is being held at the Orion port along with its 41 Filipino crewmen. —With reports from Jovic Yee and Tonette Orejas