Duterte: I told Halili not to get involved in illegal drugs | Inquirer News
Close
menu
search

Duterte: I told Halili not to get involved in illegal drugs 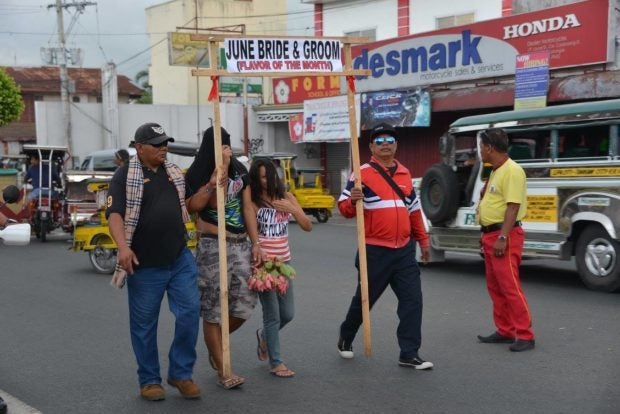 ‘WALK OF SHAME’ People arrested for alleged involvement in the illegal drug trade in Tanauan City, Batangas, are shamed publicly as part of Mayor Antonio Halili’s campaign to teach them a lesson in this photo taken on June 19, 2016. The suspects, among them women, are paired up and made to play roles as June brides and grooms. —PHOTO CONTRIBUTED BY TANAUAN CITY GOVERNMENT

President Rodrigo Duterte on Monday night said he had warned Tanauan City Mayor Antonio Halili not to get involved in illegal drugs.

“He pretends that the illegal drug problem is getting worse; he pretends to parade the drug addicts. He was killed earlier. I don’t know who killed him. I said not to get involved in illegal drugs,” the President said in Maasin, Southern Leyte.

The President, who spoke at the 58th founding anniversary of Southern Leyte, said he suspected the killing was linked to the illegal drug trade.

“I heard that Halili died. But I suspect that it’s related to drugs. Just a suspicion,” he said.

A taunt to authorities

The brazen daytime killing of the 72-year-old Halili was another case of extrajudicial killing (EJK) carried out with impunity that seemed to taunt the authorities, senators said.

“This is clearly another case of EJK or killing resulting from the so-called drug war launched by the government,” Sen. Francis Pangilinan said hours after Halili was shot dead during a flag-raising ceremony in front of City Hall in Tanauan.

“We reiterate: the everyday killings of our citizens do not and will not solve the drug problem,” said Pangilinan, president of the opposition Liberal Party.

He said Halili’s death may be considered a “revenge killing,” considering relatives of EJK victims know the killers.

“The killing of priests, prosecutors, and former and incumbent local officials in broad daylight and in full view of the public may be suggestive of the impunity and brazenness of those responsible for such acts,” Lacson said in a statement.

The Philippine National Police “should feel challenged, if not taunted,” said Lacson, who headed the PNP during the Estrada administration.

“And they must immediately consider stricter firearms control strategies before similar killings could reach ubiquitous levels,” he added.

“He is a solid ally of President Duterte in the war against illegal drugs. He is an excellent mayor who led the progressive city of Tanauan, Batangas,” Roque said.

Acting Interior Secretary Eduardo Año said his department would not rest “until the perpetrators were brought to justice.” He ordered the national police to treat the case a “top priority.”

Roque said he wasn’t aware if the inclusion of Halili’s name on the President’s narcolist was connected to his killing.

“We don’t now yet why Halili was killed. He was known for his shame campaign against drug pushers, but at the same time he lost his police powers,” he added.

The Commission on Human Rights (CHR) on Monday deployed a “quick reaction team” to investigate the killing.

“While Mayor Halili was the subject of several investigations by the Commission, no person or official, even an alleged perpetrator, must be deprived of their right to life arbitrarily and due process,” said CHR spokesperson Jacqueline de Guia.

The CHR has endorsed at least four cases against the mayor to the Ombudsman over his “walk of shame” campaign, where alleged drug peddlers and petty criminals were paraded around town.

For its part, the New York-based Human Rights Watch demanded “a thorough investigation” of the killing.

“While we did not agree with Mayor Halili’s method of dealing with crime and illegal drugs in his city, his murder is condemnable. He may have deprived many Tanauan residents of due process but that doesn’t mean he should be deprived of it, too,” HRW said.

HRW reiterated its call for an end to the prevailing culture of impunity in the country, where thousands—crime suspects, activists, members of indigenous tribes, journalists, priests and politicians—have been killed. —WITH A REPORT FROM JAYMEE T. GAMIL