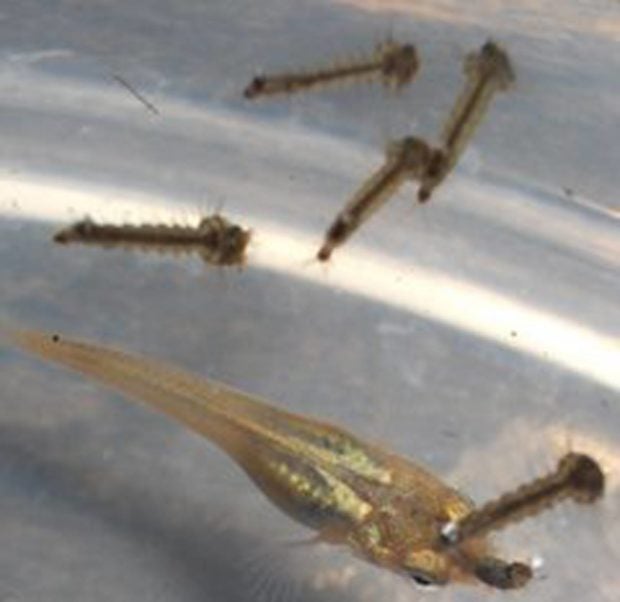 VIENTIANE — Guppy fish can be one of the five most effective forms of dengue control, as these tiny fish can be placed in water vessels in and around homes, where they will eat the larvae of dengue-transmitting mosquitoes.

The goal is to reduce the mosquito population as much as possible, and lower the incidence of dengue fever in local communities.

The four other recommended methods of mosquito and dengue control are closing and sealing all containers, flushing all water vessels, cleaning the areas surrounding residences, and finally remembering to do these four tasks regularly.

This year, the Vientiane Health Department staged the second Guppy Fish Release Week from June 16-22, aimed at encouraging the public to use guppy fish around their homes to keep dengue at bay. During the wet season, people can obtain the fish from village offices and nearby healthcare centers.

Tadthong village in Sikhottabong district, Vientiane, is regarded as a model community in the use of guppy fish for this purpose, but more villages need to do likewise in order to control the mosquito population citywide.

Many people do not understand the importance of using these tiny fish to prevent mosquitoes breeding. If every household in a community puts these fish in their water containers, health officials believe the number of mosquitoes can be gradually reduced. They like to use the slogan ‘no larvae, no mosquitoes, and no dengue fever’.

But the Director of the Vientiane Health Department, Dr Phonepaseuth Ounaphom, says that even though guppy fish are an effective method of dengue mosquito control, we need to use other methods as well to make sure we are not harboring larvae in our houses and gardens.

So far this year a total of 1,089 cases of dengue fever have been reported in Laos, resulting in two deaths. Epidemiologists believe the incidence of dengue will rise if the five recommended methods of dengue control measures are not fully implemented.

The World Health Organization says the incidence of dengue has grown dramatically around the world in recent decades. Some 2.5 billion people – two fifths of the world’s population – are now at risk of dengue. The WHO currently estimates there are 50 million dengue infections worldwide each year.

In week 11, 2018, a total of 1,079 dengue cases and two deaths were reported. The number of cases decreased by 6.4 percent compared to the previous week.