Seed bank established to save indigenous crops in Nepal 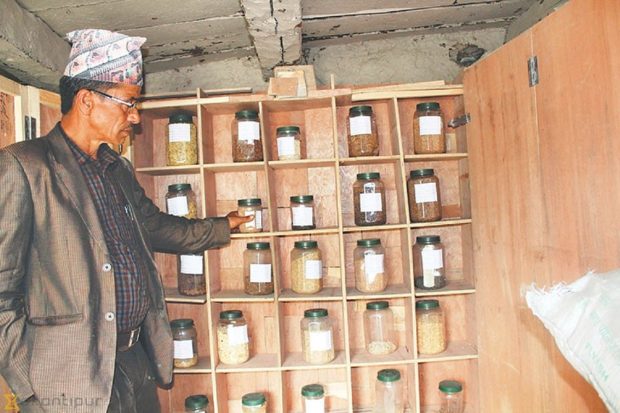 KATHMANDU — With various crops grown in the district possessing immense health benefits being pushed to the verge of extinction as their value was not being understood by a majority of the people, the rural municipality formed Masta Small Farmer Cooperative.

It has organized the farmers to run a campaign to conserve different indigenous crops of the region.

As part of the campaign, the cooperative established a community seed bank which is managed by a seven-member committee. Dhir Bahadur Khadka, chairman of the community seed bank, said that some varieties of indigenous crops had already disappeared.

“If we do not start conserving indigenous crops immediately, more of them will disappear in a few years,” he said. “We are encouraging farmers to cultivate indigenous crops that are close to becoming extinct.”

The seed bank has stored seeds of indigenous varieties of paddy such as Tagmaro, Ladmandya, Ubho Deshi, Sunakhari, Rato Dhan, Ram Jamuna and Jauli Dhan. Likewise, seeds of indigenous crops such as Marshiya, Kodo, Kaguna, Fapar, Rato Jhalo, Chamandya Katho, Mundullo, Baddi wheat and Bhadaure maize, among others, are also being preserved. The bank has stored seeds of different varieties of soybeans and pulses in order to sell them to farmers at a fair price when they need them.

The bank supplies up to 5 kg of seeds at a subsidized rate to locals of Masta and Bhatekhola rural municipalities which contain more than 500 households.

Out of district farmers have to pay the full price to procure the seeds, according to Rammati Kathayet, member of the community seed bank.

The bank collects seeds of indigenous crops from farmers and stores them after they have been properly treated. As the productivity of the seeds increases after the treatment, farmers of the region are attracted towards such seeds. “The seeds from the bank are more productive than the ones we store at home,” said Sinki Dabi Okheda, a farmer.

Demand for indigenous varieties of crops is very high in the major cities of the country, and they fetch higher prices than modern varieties of crops. The rural municipality is also planning to coordinate with the seed bank for the promotion of indigenous crops, according to Karna Bahadur Kathayet, chairman of Masta Rural Municipality.

“We are planning to support promotion and market access for indigenous crops,” he said, adding that the number of farmers growing indigenous crops would increase as the market expands.

ADVERTISEMENT
Read Next
War on plastic leaves manufacturers clutching at straws
EDITORS' PICK
IATF to LGUs: Issue ordinances vs attacks on frontliners, COVID-19 patients
Quick chat with Nicole Andersson: ‘You really don’t need much to be happy’
Robredo spox thanks Duterte for defending VP’s efforts vs COVID-19
Diokno to Duterte: OK to make fun of buck tooth, but focus on people’s needs first
Nograles: Cabinet members to donate 75% of monthly salary to aid COVID-19 fight
10 Filipinos positive for COVID-19 in UK, 7 in Ireland — envoy
MOST READ
Coronavirus hotbed Rizal to shut borders on April 6
Gov’t mulling quarantine period extension of 15-20 more days
Sotto on Isko Moreno’s call: We do our job without the media following our every move
‘Money Heist,’ ‘Tales from the Loop,’ ‘Killing Eve,’ ‘Never Have I Ever,’ ‘After Life’: Five not-to-be missed series this April
Don't miss out on the latest news and information.