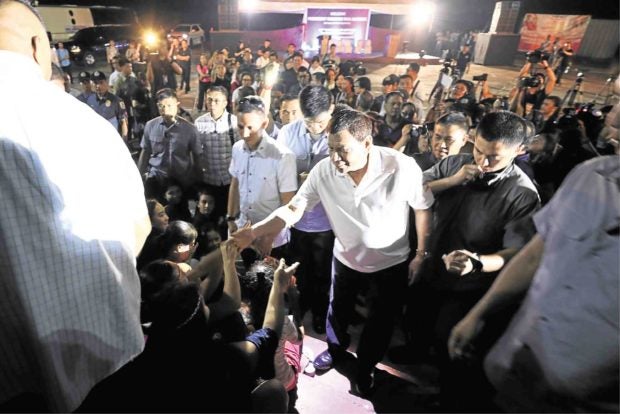 IMPRESSED President Duterte shakes hands with well-wishers in Tacloban City, which he said had already recovered from the onslaught of Supertyphoon “Yolanda.”—MALACAÑANG PHOTO

President Rodrigo Duterte recalled seeing massive destruction in Tacloban City shortly after Supertyphoon “Yolanda” struck in 2013, saying it was one of the “saddest days” of his life.

But on his return to the city on Saturday, the President heaped praises on the people of the city for rising from Yolanda’s destruction.

“The progress that we see today is a testament of the resiliency, unity and hope of Taclobanons which have been tested and tried by various challenges,” the President said in a speech for the Sangyaw Festival of Lights, one of the highlights of Tacloban’s 129th fiesta celebration that is held every June 30.

When he arrived in Tacloban shortly after Yolanda struck on Nov. 8, 2013, the President said the scene of devastation made him weep.

“Literally, I was bleeding inside my heart,” he said.

The President read from his prepared speech but went impromptu when he talked about what he saw in Tacloban in 2013.

The President, mayor of Davao City when the typhoon struck, was one of the first officials to visit Tacloban after Yolanda to offer help.

On Saturday, the President said he was impressed by the progress that Tacloban had made after Yolanda.

“With the collective efforts of your officials, I am confident that Tacloban City will continue to be a vibrant and thriving local community in your region,” he said.

City government officials had said Tacloban, regional capital of Eastern Visayas, had bounced back since 2013.

Its hotel business is booming with 86 hotels now from just 60 prior to the onslaught of Yolanda that killed more than 2,200 people.