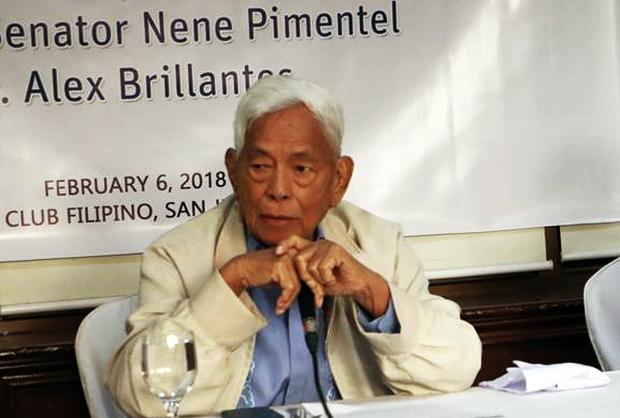 Former Senate President Aquilino Pimentel Jr. speaks at the Media Forum on Federalism at the Club Filipino in San Juan on Tuesday, Feb. 6, 2018. (Photo from the DILG Facebook page)

CAGAYAN DE ORO CITY — The consultative committee reviewing the 1987 Constitution aims to finish the proposed draft for a new charter by July 23, when President Rodrigo Duterte delivers his the third State of the Nation Address (Sona), according to former Senate President Aquilino “Nene” Pimentel Jr.

Pimentel said he expected Duterte to mention the provisions in the proposed draft, which includes, among others, the shift to a federal-presidential form of government, the in-tandem election of the two highest political positions in the country – the president and the vice president – and the educational requirement of candidates for public office.

Pimentel was among the 19 personalities appointed by the President in the 25-member consultative committee.

He said the revised version of the Constitution wuld contain new provisions, such as the adoption of the federal-presidential system of government, which the President had promised the people during the campaign which had brought him to the presidency.

“[The proposed constitution] is much thicker than the present one because there are many provisions that we are trying to flesh out,” Pimentel said.

“Under the federal setup, we will calibrate the education requirements of barangay, municipal, city, provincial up to the president, elective positions,” he said during visit here last June 27, when he talked about federalism.

Under the proposed federal-presidential system, the president will serve both as head of state and head of government.

Pimentel said it would be up to the federal government to tinker with the Local Government Code should the new leadership decide to revise it.

“We are not yet touching on the local government because we are trying to say it’s up to the federal state what they want to do with the Local Government Code,” he said. “But the advantage now is that the local governments concerned can participate directly because they are there at the federal state level, unlike today when they had to go to Manila if they wanted to contest an action of Congress. Not anymore.”

Under the federal system, the power of the national government will be decentralized. Individual states would have their own federal legislature and state governments.

Pimentel said one of the provisions of the proposed constitution would be a ban on political dynasties in the country, although he acknowledged that this was one of the most difficult provisions to craft.

“Families control many areas of the country,” he said. “In spite of that we are pushing for the dismantling of political dynasties.” /atm