Duterte: Me, say sorry? Not in a million years 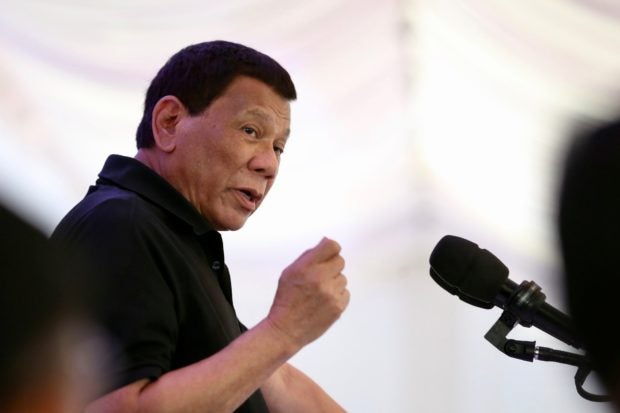 President Duterte said he was just trying to “shake the tree of society” when he called God stupid and would never apologize for his words.

“I will not do that (say sorry),” the President told reporters after the 25th National Convention of the Vice Mayors League of the Philippines in Panglao, Bohol. “Definitely not in a million years.”

“You know God is personal. It is not formed by textbooks,” the President said.

But Mr. Duterte said his God was “forgiving.”

“We have different gods,” he added. “We wouldn’t understand each other. I have this deep and abiding faith in God,” he said.

“That’s how life really is,” he said.

He added that he reads that passage in Ecclesiastes 3 daily.

In his speech, he said his relationship with God was so personal he even called Jesus “Jess.”

He said he chose to be silent in his rift with the Catholic Church because “there would be a time to speak and I will.”

“It’s like I’m shaking a tree,” he said. “If you’d notice me every now and then, I really mess up the tree.”

On accusations he was ranting against God to distract from other issues, the President said: “What’s the issue? What do you mean distract?”

In his speech in Davao City last week, Mr. Duterte said: “Who is this stupid God? You created something perfect and then you think of an event that would destroy the quality of your work. How can you rationalize that God? How can you believe Him? So now we’re all born with an original sin. Even in the womb, we already have sin. What kind of religion is that?”

Pastor Saycon, a consultant tapped by Malacañang as one of its emissaries in a dialogue with the Church, said “our President is just really like that.”

“He just speaks roughly,” he said.

Saycon said he met on Thursday for initial talks with Fr. Jerome Secillano, executive secretary of the permanent committee on public affairs of the Catholic Bishops Conference of the Philippines.—WITH REPORTS FROM TONETTE OREJAS AND TINA G. SANTOS