Duterte on Samar misencounter: The ultimate blame, fault is on me | Inquirer News
Close
menu
search

Duterte on Samar misencounter: The ultimate blame, fault is on me 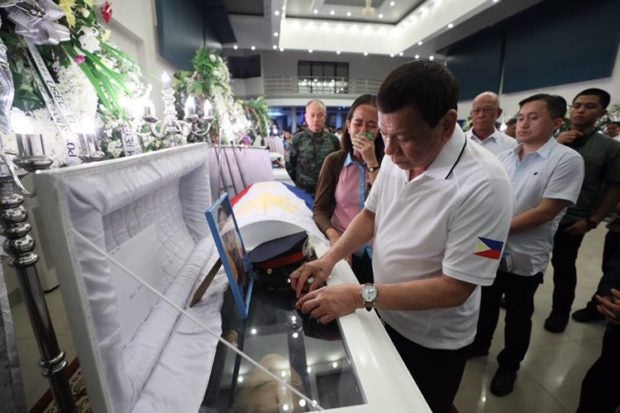 President Rodrigo Duterte visits the wake of the policemen killed during a misencounter with the military in a hinterland village in Samar. The wake is at the Camp Ruperto Kangleon in Palo, Leyte. Malacañang photo

President Rodrigo Duterte took full responsibility on the bloody misencounter between the police and military, which led to the death of six policemen in Samar.

“I would like to tell you that the ultimate blame, fault is on me,” Duterte said in a speech on Friday during the Sangyaw Festival of Lights in Tacloban, Leyte.

Known for delivering lengthy speeches that last for hours, Duterte’s speech on Friday night could be one of his shortest messages.

Duterte was in Palo, Leyte prior to his visit in Tacloban City to attend the wake of the slain policemen at the Camp Ruperto Kangleon.

The President blamed the Murphy’s Law in what he described as a who described the misencounter as “a very unfortunate event.”

READ: Duterte on Samar misencounter: ‘Nobody wants it’

“I told them, forget about it. It was not intentional and you know the Murphy’s Law operates the way it is. If things can go wrong, it will go wrong,” he said.

He told the police and the military to forget the hurts and assured them that an investigation was ongoing.

“And so I said to the police and the army, I am your commander and so I just said that it’s all my fault, but since you’re all my soldiers, let us forget the hurts, allow the investigation to go on, and let us see what develops in the future,” he said.

On the morning of June 25, six policemen and nine others were injured after a misencounter between members of the Philippine National Police and the Armed Forces of the Philippines in a hinterland village in Samar. /jpv