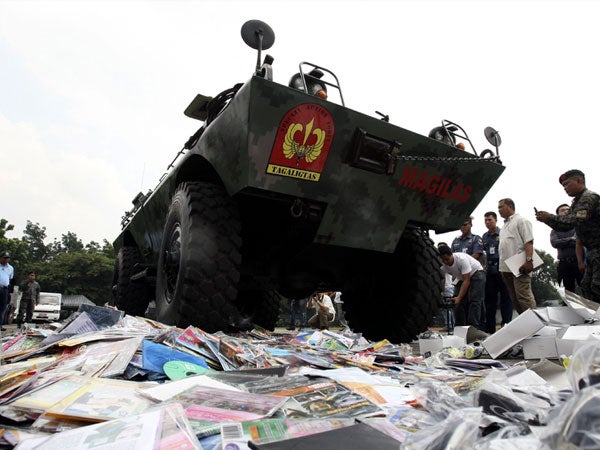 In this file photo, an Armored Personnel Carrier of the Philippine National Police runs over piles of pirated DVDs and counterfeit sunglasses during ceremonial destruction of fake goods seized in raids at the parade grounds of Camp Crame. AP

Roughly P7-billion worth of fake and pirated products had been confiscated by the National Committee on Intellectual Property Rights (NCIPR) in the first five months of 2018.

Led by the Intellectual Property Office of the Philippines (IPOPHL), the inter-agency intellectual property task force seized P6.7-billion worth of fake products from January to May 2018, amounting to over 80 percent of NCIPR’s total seizure of P8.2 billion in 2017.

“In the two months since the first quarter seizure, the National Bureau of Investigation and the Philippine National Police confiscated P1.4 billion additional counterfeit goods, bringing the five-month total to P6.7 billion,” IPOPHL said in a statement.

The figure would most likely increase as the reports from the Bureau of Customs, the Food and Drug Administration, and Optical Media Board are submitted.

The increased prices of authentic cigarettes may have resulted in the spread of fake cigarettes due to the growth of demand, according to NCIPR Deputy Director General Teodoro Padua.

“It may also be a product of the private sector’s more proactive reporting of counterfeiting activities in cigarettes, that spur an increased drive to seek them out,” disclosed Padua.

Aside from fake cigarettes and cigarette paraphernalia, hand bags and wallets worth P151 million were also seized during the five-month haul.

The Optical Media Board also seized optical disks worth P103 million based on January to March data.

A ceremonial destruction of the accumulated fake and pirated products was held in Camp Crame on Thursday as a symbol of the “sustained effort and determination of the NCIPR [in tackling] the ills of piracy and counterfeiting,” said IPOPHL Director General Josephine Santiago.

NCIPR is also coordinating with government agencies and local government units to strengthen the enforcement efforts against these illegal acts.

“In addition to being unrelenting in coordination efforts with the member agencies, we are now also exploring alternative solutions to address these ills, which includes developmental meetings with involved sectors and concerned government units,” Santiago added. Syrah Vivien Inocencio / INQUIRER.net intern / jpv