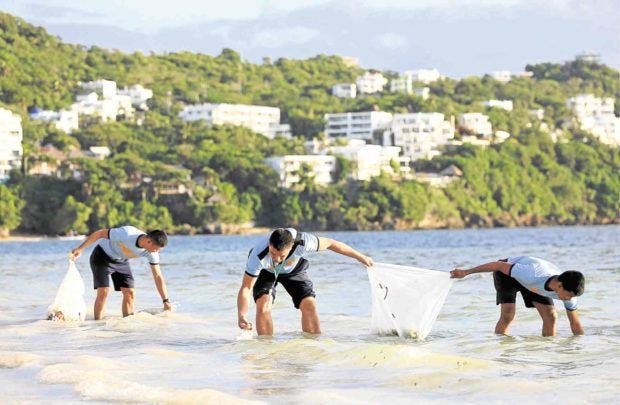 BAGUIO CITY — Boracay could reopen earlier than the six-month deadline set by President Duterte for an interagency task force to clean up the resort island in Aklan province, according to an official of the Department of Environment and Natural Resources (DENR).

We will work within the period provided by the President. Six months could be the maximum but we are pushing to open it earlier,” Juan Miguel Cuna, DENR undersecretary for field operations, said during the Cordillera Environmental Summit. He represented Environment Secretary Roy Cimatu who made the same assurance months ago.

Cuna said Boracay could be opened as soon as vital requirements were addressed, such as the improvement of water quality on the island and its surrounding waters.

But it would take more than six months to revive Boracay’s “serenity and beauty,” which, he said, were diminished by the “mismanagement of solid waste, poor sewerage system and illegal discharge of wastewater.”

“We ask for understanding, cooperation and the active involvement of all the stakeholders, given that restoring Boracay as one of the best beaches in the world is tough yet worthwhile,” he said.

According to Cuna, the Ecosystems Research and Development Bureau is working with experts from the University of the Philippines to determine the carrying capacity of the 1,032-hectare island.

He said the result of the study would help draw up policies for governing Boracay, including those on the number of tourists it could accommodate at any given time and the number of establishments it could host.

Similar studies will be conducted in key tourist areas to curb urban or rural degradation, he said.

The six-month shutdown starting April 26 prevented the island from taking in tourists that would cost the economy about P1.96 billion, according to the National Economic and Development Authority. —KARLSTON LAPNITEN