‘Fakes’ worth P11.8M destroyed at Crame 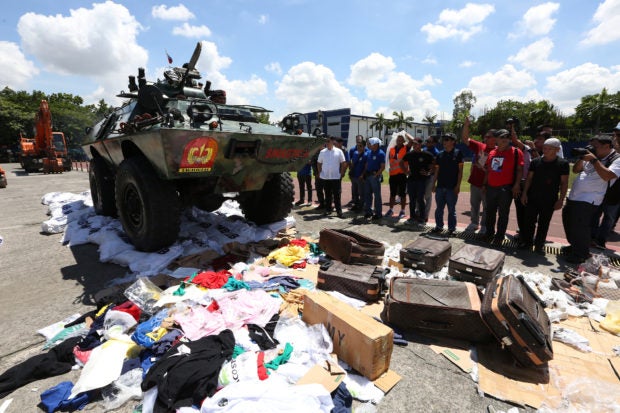 Authorities on Thursday destroyed some P11.8-million worth of counterfeit goods, including copies of high-end fashion brands, a fraction of the total products confiscated during the first five months of the year worth P6.7 billion.

The activity, which employed heavy equipment that included a road roller, a backhoe, a bulldozer and an armored personnel carrier, was held by the National Committee on Intellectual Property Rights (NCIPR) at Camp Crame.

Witnesses included the representatives of companies whose products were counterfeited, including Louis Vuitton, Lacoste and WD-40, among others.

Teodoro Pascua, deputy director general of the Intellectual Property Office of the Philippines (IPOPHL), noted that the P6.7-billon worth of counterfeit products seized by the NCIPR from January to May this year far exceeded P909-million total recorded in the same period last year.

The Philippine National Police-Criminal Investigation and Detection Group, one of the members of the committee, contributed the biggest haul this year with the seizure of P1.4-billion worth of fake products, Pascua added.

Counterfeiting and piracy are forms of economic sabotage and cause substantial losses in government revenues that fund public services, he said. They also result in “losses and reduced employment in legitimate companies, poor product quality, and threats to public health,” Pascua stressed.

Created in 2008, the NCIPR is chaired by the Department of Trade and Industry, with the following members: the PNP, IPOPHL, the justice and interior departments, Bureau of Customs, National Bureau of Investigation, National Telecommunications Commission, Optical Media Board, National Book Development Board, Food and Drug Administration, and the Office the Special Envoy on Transnational Crime. —JEANNETTE I. ANDRADE