Fuel subsidy for jeepney drivers at P5K over 6 months 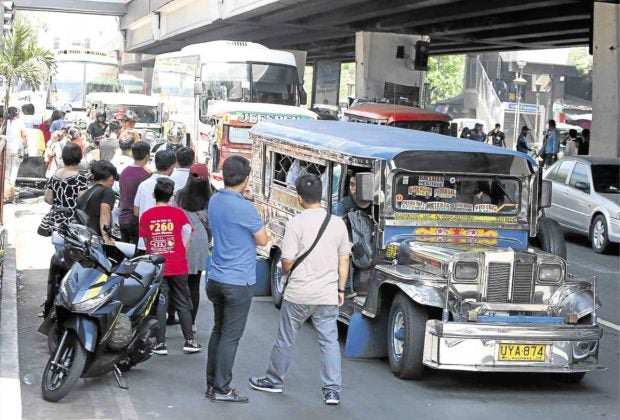 INTERVENTION About 179,000 jeepney franchise holders stand to benefit from the subsidy
according to LTFRB Chair Martin Delgra. —MARIANNE BERMUDEZ

The government expects to roll out the fuel voucher program for jeepney drivers in July amid the rising clamor for government intervention to ease the effects of rising pump prices.

In an interview on Wednesday, Land Transportation Franchising and Regulatory Board (LTFRB) Chair Martin Delgra III said the agency would be issuing debit cards to jeepney operators starting next month, alloting a subsidy of P5,000 each under the P977-million Pantawid Pasada program.

The program, which also involves the transportation, finance, budget and management, and energy departments, is intended to help jeepney drivers cope with the effects of the Tax Reform Acceleration and Inclusion (TRAIN) law, particularly on the price of fuel.

The beneficiaries will be using ATM debit cards processed by the Land Bank of the Philippines (LBP), another partner agency in the program.

The fuel voucher program was introduced by what was then the Department of Transportation and Communication under the Aquino administration, covering 100,000 drivers who received cards loaded with P1,200 to be used for purchasing fuel.

In 2015, however, the Commission on Audit cited irregularities in the program.

Its revival under the Duterte administration was prompted by the passage of the TRAIN law and  fare hike petitions from transport groups.

Learning from the red flags raised by COA in the past administration, Delgra said, the new iteration of the voucher program will use LBP cards containing information specific only to the operator-beneficiaries: His or her name, the vehicle, and its plate number.