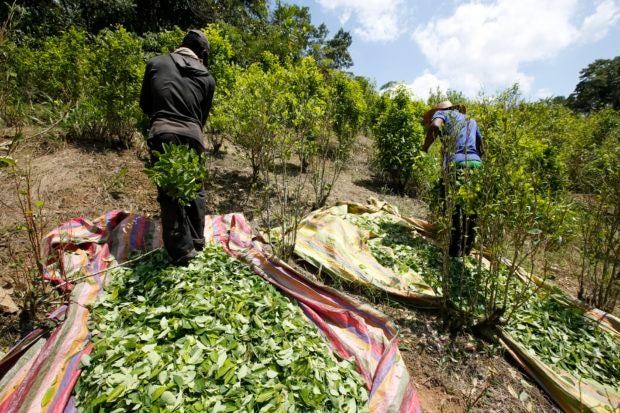 Bogota, Colombia – Colombia will resume aerial spraying of coca plantations with the herbicide glyphosate to counter a record increase in production of the cocaine crop, President Juan Manuel Santos announced on Tuesday.

Santos, who will step down at the end of his term in August, said the health and environment ministry had approved pilot plans to resume spraying with the herbicide.

Colombia, the world’s largest producer of cocaine, stopped aerial spraying in 2015 because of health concerns, but has come under increasing pressure from the United States to curb record coca production.

Santos, who will hand over seat to his hardline right-wing successor Ivan Duque, said spraying would be carried out by drones at a lower altitude and with a glyphosate concentration of less than 50 percent of that previously used when spraying gave rise to cancer concerns.

The Colombian announcement comes a day after the US National Office of Drug Control (ONDCP) reported that the area under coca cultivation in Colombia had grown by 11 percent to 290,000 hectares (716,000 acres), the highest level in its history.

It said cocaine production had increased by 19 percent.

“The message from President (Donald) Trump is clear: the record growth in cocaine production has to be reversed,” said ONDCP deputy director Jim Carroll.

The South American country’s government used aerial spraying for a 15-year period in a bid to counter drug trafficking and was the last country in the world to suspend it in favor of manual methods after a 2015 Constitutional Court ruling that it was harmful to health.

Drones instead of planes

Using drones instead of planes will prevent airborne contamination from glyphosate, and causing “damage” to crops and people, Santos said.

“It’s similar to what we are already doing, with eradicators going with a tank on their shoulders spraying on the ground,” Santos told the National Council of Narcotic Drugs, which endorsed the new measures.

Farmers have alleged their legitimate crops as well as groundwater are damaged by aerial spraying, and Colombia had to agree to compensate neighboring Ecuador in 2013 for aerial fumigation of border areas that allegedly destroyed crops, killed livestock, and sickened rural farmers.

In the US, a Californian dying of cancer is suing US agrochemical giant Monsanto in the first such trial, claiming its popular herbicide Roundup – whose main ingredient is glyphosate – caused his disease.

Santos said giant “Caterpillar” type tractors would also be used to destroy the crops, which are often protected by drug traffickers using mines and snipers.

Historically, the US market has been the main destination for the Colombian drug, ahead of Europe and Asia.

The US has pointed to an increase of cocaine use, and linked it to increased production in Colombia.

“It’s a problem and we have to face that, as we have done these past 20 years, ” US ambassador to Colombia Kevin Whitaker told FM radio on Tuesday.

He said the US did not have experience in the use of drones to combat coca production.

“I hope it serves for something,” he said.

Santos did not say when crop spraying would resume, though Defense Minister Luis Carlos Villegas said earlier this week that he expected it to begin on Wednesday.

Colombia has linked the increase in coca plantations with the suspension of spraying. Santos signed a historic peace agreement with former rebels FARC in 2016, which largely controlled coca-producing areas. But the treaty, and a crop-substitution effort, has failed to stop production.

With both replacement and eradication, the government expects to destroy 110,000 hectares of coca crops by the end of the year.

Washington and Bogota also agreed in March to a plan to cut by half the area under coca cultivation within five years.

“It’s a struggle that is not Colombia’s alone, it’s the responsibility of the whole world,” Santos noted.

The government initiated manual fumigation with glyphosate in January 2017, following a pilot scheme that established environmental and health protocols.   /kga