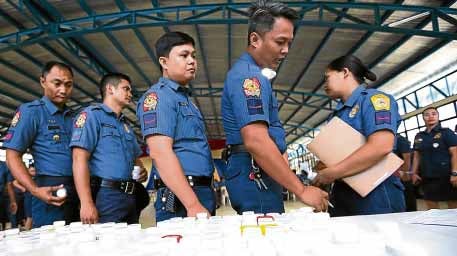 SETTING EXAMPLE Quezon City policemen take part in drug tests, which several legislators said should be mandatory for all government officials, including the President.—NIÑO JESUS ORBETA

Several senators have backed a proposal for all public officials, from the President down to the village councilors, to undergo mandatory drug testing, saying this would allow the officials to set an example for the public amid the government’s campaign against drugs.

The proposal is pending in the House of Representatives after it was made by Surigao del Norte Rep. Robert Ace Barbers.

Sen. Sherwin Gatchalian said that since the Duterte administration had been strictly enforcing the antidrug campaign, public officials should be the first to show they were following the law.

“We can take it from President all the way down to the kagawads (village councilors) to make it mandatory before assumption of office,” Gatchalian told reporters.

The drug test could be done every year, he said.

“It’s good if the people will see that officials are willing to undergo a drug test,” he added.

Senate President Vicente Sotto III also agreed with the idea and said he had pushed for it in the past.

Sotto, who used to head the Dangerous Drugs Board, said he had included a provision in the Comprehensive Drugs Act requiring all candidates for public office to undergo a drug test, but the Supreme Court struck it down for being unconstitutional.

But even without a new law, he said public officials could be encouraged to subject themselves to drug testing.

Sen. Joel Villanueva said this was in line with the saying that public office is a public trust.

Sen. Francis Escudero also said he was for it.