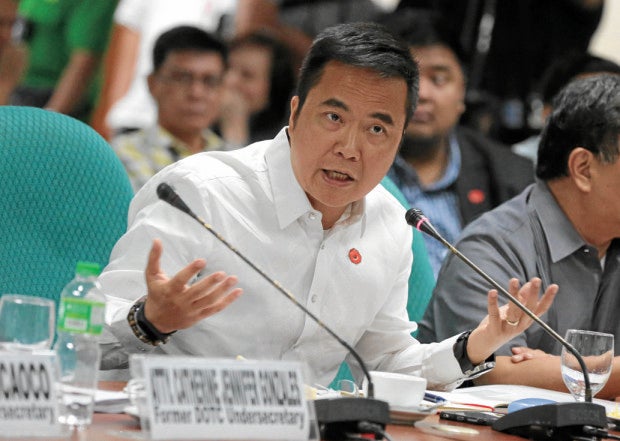 Ombudsman Conchita Carpio Morales has ordered the indictment of former Transportation Secretary Joseph Emilio Abaya and 16 others for graft for awarding P4.25 billion in contracts for the maintenance of Metro Rail Transit Line 3 (MRT 3) to an unqualified and ineligible contractor in 2015.

A statement released by her office said Morales, in a resolution approved on June 21 and released on Monday, found probable cause to charge Abaya and the others for violation of Section 3(e) of the Anti-Graft and Corrupt Practices Act.

Lawyer Enricka Gonzalez, a spokesperson for Abaya, described the Ombudsman’s decision as “unfortunate.”

“We have received the news through the media that the Office of the Ombudsman has decided against former [Transportation] Secretary Jun Abaya and his team,” Gonzalez said in a text message to reporters.

“We find this decision unfortunate, considering that [Secretary Abaya] clearly laid out his defense against the poorly crafted and unsubstantiated complaint filed by the DOTr (Department of Transportation),” she said.

Gonzalez said Abaya would consult his lawyers on his next step once he received a copy of the Ombudsman’s resolution.

The finding of probable cause may be appealed before the Ombudsman files formal charges against Abaya and 16 others in the Sandiganbayan.

The statement said a special panel of investigators had found that the respondents “extended unwarranted benefits, advantage and preference” to Busan Universal Rail Inc. (Buri) of the Filipino-Korean Busan Joint Venture (Busan JV) despite being “ineligible” and “unqualified.”

It stressed that “Busan JV was not technically, legally and financially capable to undertake the MRT 3 long-term maintenance contract.”

“Despite its being unqualified, the contract was still awarded to it by the DOTr, in violation of Section 53 of the RIRR of RA No. 9184, which requires that in negotiated procurement, the procuring entity should negotiate with a technically, legally and financially capable supplier, contractor or consultant,” the statement said.

“By allowing the award of the contract to the Busan JV despite the attendant glaring irregularities, Abaya deliberately ignored applicable laws, rules and regulations, and standard operating procedures, falling short of or disregarding the required competence expected of him in the performance of his official functions,” it added.

The other former transportation officials who were ordered indicted were Undersecretaries Edwin Lopez, Rene Limcaoco and Catherine Jennifer Francis Gonzales.

In October last year, the DOTr terminated the contract of Buri for failing to “ensure the availability of [a] contractually obligated number of trains, and more importantly, to put in operation reliable and efficient trains.”

The decision came after a long string of service failures at MRT 3 that the DOTr blamed on the “poor performance” of Buri in maintaining operations at the Edsa metro.

The Ombudsman’s resolution should remind everyone in government that graft is a serious offense, said Sen. Grace Poe, chair of the public services committee that inquired into unceasing problems at MRT 3.

“While we lament that the same is bailable, let this be a lesson to everyone in [the] government that public officers are accountable for each and every contract that they enter into on behalf of the Filipino people,” Poe said.

The Ombudsman’s findings, she said, tallied with the report of the Senate public services committee that blamed the MRT 3 troubles on the negligence and inaction of transportation officials.

Poe said these lapses showed “insensitivity, callous indifference, and acts disadvantageous to the commuters, to the Filipino public and to the government with regard to the malfunction problem of the MRT.”—WITH REPORTS FROM VINCE F. NONATO AND LEILA B. SALAVERRIA