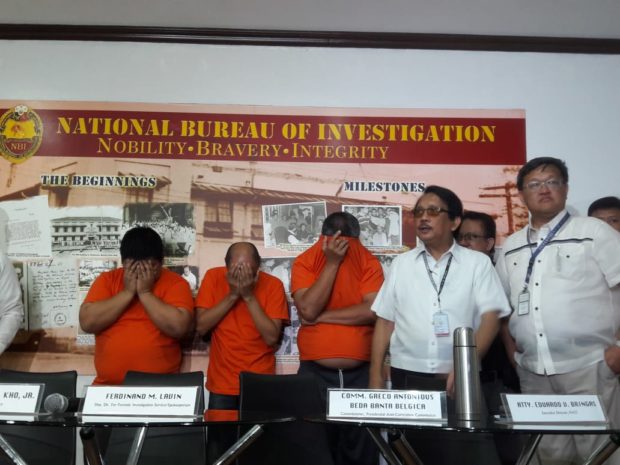 The Presidential Anti-Corruption Commission (PACC) and the NBI announces at NBI the arrest of three BIR personnel for Extortion. EARVIN PERIAS

National Bureau of Investigation (NBI) operatives have arrested three special investigators of the Bureau of Internal Revenue (BIR) in an entrapment operation in Greenhills, San Juan over bribery charges.

NBI Director Dante Gierran, in a statement on Monday, identified the suspects as Arturo Buniol, Gary Atanacio, and Edgardo Javier, all employees of the BIR Regional Investigation Division.

Gierran said charges for violation of Article 210 of the Revised Penal Code (bribery) and violation of the Anti-Graft and Corrupt Practices Act have already been filed before the Office of the Ombudsman.

An employee of the restaurant, according to Belgica’s complaint, disclosed that the BIR employees have been conducting surveillance activities on their establishment despite having been operating for a year.

Gierran said the BIR employees allegedly asked the restaurant employee to pay them P600,000, half of the restaurant’s P1.2 million tax liability, and to secure an accountant’s services.

But Belgica, Gierran bared, had sent text messages to the suspects under the guise of a lady accountant to discover the purpose of the payment being demanded.

“Through exchange of messages, Comm. Belgica (acting as Kath Legaspi) discovered that the subjects were asking for P75,000 from the P600,000 for restaurant’s alleged tax liability and the balance will be given to the ‘other side,’ which the subjects were referring [to],” the NBI chief said.

Based on the information provided by the PACC, Gierran said he had ordered the NBI Special Task Force to arrest the suspects through an entrapment operation. /je