Duterte: Economy in the doldrums 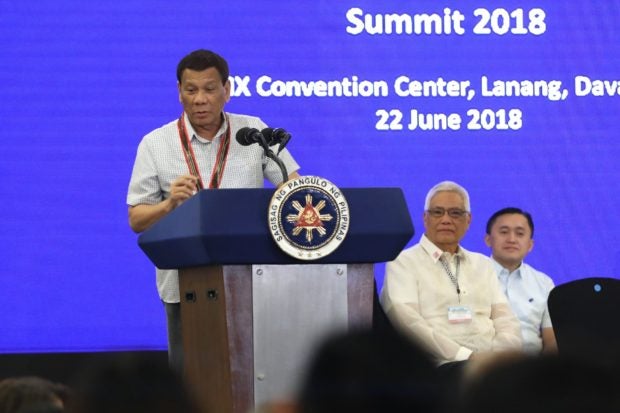 President Rodrigo Roa Duterte, in his speech during the National Information and Communications Technology (ICT) Summit 2018 at the SMX Convention Center in Lanang, Davao City on June 22, 2018. PRESIDENTIAL PHOTO

DAVAO CITY — Economic activity is stagnating in the provinces and no less than President Duterte himself is worried that the rising prices of goods could prolong the period of gloom.

“Now, the economy is in the doldrums, actually [it is] now,” Mr. Duterte said on Friday night, less than a week after the Bangko Sentral ng Pilipinas (BSP) raised interest rates for the second time since September last year to counter inflation.

The President admitted that the situation in the provinces had become a problem for his administration because projects were barely progressing.

“Interest rates are picking up, are getting high so it destroys the existing [economic gains] … You raise your [interest rate], our [peso value] goes down, theoretically,” Duterte said in a speech at the National Information and Communications 2018 Summit at SMX Convention Center here.

“I said in Manila, they’re starting the megaprojects well. I supposed that they would be doing it on time. But in the provinces, it’s a doldrums thing,” he added.

The BSP raised interest rates anew last Wednesday to 3.5 percent from May’s 3.25 percent due to inflation concerns. Until the central bank moved to counter rising prices a month ago, the interest rate had stood at 2.75 since September last year.

The BSP said it decided to raise interest rates anew as inflation surged to a five-year high of 4.6 percent.

The Philippine economy actually grew by 6.8 percent in the first quarter of 2018—among the fastest in the region and faster than the rate recorded in the same period last year — with manufacturing, trade and other services as the main drivers of growth, according to the Philippine Statistics Authority.

Thanks to additional revenues from the Tax Reform for Acceleration and Inclusion (TRAIN) Act, the share of taxes collected by the government also increased to a record high of P567.1 billion in the first quarter.

In an economic bulletin, Finance Undersecretary Gil Beltran said the first-quarter expenditure effort, or share of government spending in the gross domestic product (GDP), reached a 15-year high of 20 percent.

Beltran attributed this to the rollout of the Duterte administration’s ambitious “Build, Build, Build” infrastructure program.

Citing Department of Finance data, he said expenditures on public goods and services climbed 27.1 percent year-on-year to P782 billion as of end-March, “outstripping the 9.7 percent nominal GDP growth due to the estimated 40-percent increase in capital outlays.”

The President said the government was seeking more funds to finance big-ticket projects in the provinces to induce economic growth.

“I’m just … brainstorming with everybody in the Cabinet how to come up with a system that would guarantee income to the government,” he said.

The President said the campaign to stop “jueteng” nationwide was well under way but he was considering a strong replacement for the numbers game to stimulate economic activity in the provinces.

“Now if I don’t have a replacement for jueteng, what can I do? It’s easy. If there’s another form of gambling that takes over, I’ll say, ‘You get out of there’ and arrest them all. Then what is the activity—economic activity? None. Now if there’s jueteng … at least money goes around. Some people will get hungry, others will be able to eat, [but] there’s commercial activity,” he said.

To finance some of the big infrastructure projects, as well as the pending rehabilitation of Marawi City, the government is borrowing money from such countries as China and Japan. —Reports from Allan Nawal, Ben O. de Vera, Inquirer Researcn