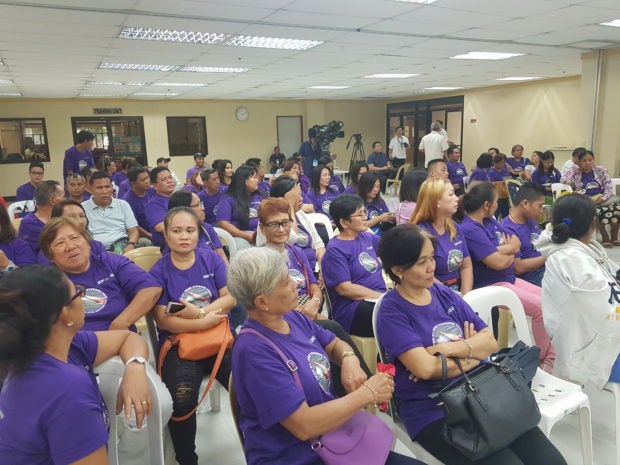 PAIN REMAINS Relatives of the ship passengerswho died in the June 21, 2008, ‘Princess of the
Stars’ tragedy in thewaters of Romblon province gather at the Public Attorney’sOffice in Quezon
City on Thursday. —JODEE A. AGONCILLO

Ten years after MV Princess of the Stars capsized off Romblon province, the relatives of the disaster’s more than 833 fatalities and scores of survivors continue to seek justice, with most of the cases they filed in court still pending.

On Thursday, some 200 victim-claimants clad in violet shirts gathered at the Public Attorneys Office (PAO) in Quezon City to commemorate the 10th anniversary of the tragedy and to share stories about the loved ones they lost.

The interisland ferry capsized on June 21, 2008, at the height of Typhoon “Frank” (international name: Fengshen) near Sibuyan Island in San Fernando, Romblon province.

Ledy Samuelle, head of the group of victims and their relatives, said that of the more than 1,000 passengers, 833 died, 58 survived and the rest remained missing.

“For 10 years, we have been going to and from Romblon to dive deep and extract the bodies of the victims,” said PAO chief Persida Rueda Acosta.

The only victory they can claim so far, she added, is winning the administrative case they had filed against Sulpicio Lines Inc. (since renamed Philippine Span Asia Carrier Inc.), asking the Maritime Industry Authority to cancel its franchise. The shipping line is now prohibited from ferrying passengers and is allowed to carry cargo only.

The claimants also filed 71 cases for civil damages against Sulpicio Lines Inc. and its crew,  and won the consolidated case at the Manila Regional Trial Court (RTC) in 2015, Acosta said.

The Manila RTC found the shipping company “liable for negligence and breach of contract of carriage when defendants failed to exercise extraordinary diligence in transporting its passengers to their destination in Cebu.”

But the claimants have yet to benefit from the P241 million in damages granted them in the Sept. 18, 2015, decision of Judge Daniel Villanueva of the Manila RTC Branch 49, as the civil damage suit remains pending at the Court of Appeals (CA), the PAO chief added.

Meanwhile, the 64 consolidated cases filed before the Cebu RTC by relatives of the victims in the Visayas and Mindanao have remained pending because the presiding judge retired for personal reasons, Acosta said.

Most of the claimants have already received the P200,000 insurance claim, she said.

Aside from the civil cases, the PAO also filed criminal cases for reckless imprudence resulting in multiple homicide and damage to property against Sulpicio Lines vice president for administration Edgar Go in RTC Branch 5.

The case remains pending at the Supreme Court.

During the anniversary gathering, four of the 58 survivors shared their experiences, with most of them expressing disgust at the country’s snail-paced justice system.

“It is very slow,” said Richard Fajiculay who lost his 18-year-old daughter, Queenie, in the disaster. “I hope we’d still find justice because we have a strong case,” he added.

The one good thing that resulted from the tragedy was that most shipping lines have become more cautious in allowing their ships to sail, especially during typhoons, Fajiculay said.

Melinda Batiancila, a survivor who lost 15 of her relatives in the tragedy,  including her 15-year-old youngest daughter, painfully recalled that fateful day.

“Ang sakit sakit (It hurts so much). You’d think you’ve already moved on, but the pain is still there,” she wailed.

Batiancila said her family was  supposed to go to Bantayan Island to celebrate the fiesta. Instead, they found themselves in a mournful gathering.

“[Our loved ones] still make their presence felt. Maybe because we haven’t had real justice. They will only be at peace once we see justice done,” she said.

Samuelle, president of Justice for MV Princess of the Stars Victims and who lost two relatives in the sinking, said four of the original claimants had already died waiting for the damages from the case still pending at the CA.

Still, he asked other claimants to remain patient and hopeful since the trial was bound to take years.

Adeline Dimaranan, who lost her parents in the tragedy, noted how “it seems, every 10 years, sea disasters happen whenever there are storms.”

Josephine Padua, 34, also lost her husband and their only child in the maritime disaster.

Her husband, Roy, 35, and 3-year-old daughter, Jacquelyn Rhoz, were on their way to Zamboanga to visit family members when the ship sank.

She buried her husband’s remains after they were recovered in Cebu in 2009, but her daughter’s body remains in PAO custody like some of the retrieved bodies, she said.

Padua expressed hopes that the court would speed up the resolution of the cases, “so I can finally give my daughter a proper burial,” she said. —With reports from Julia Ornedo and Andrea Alcaraz