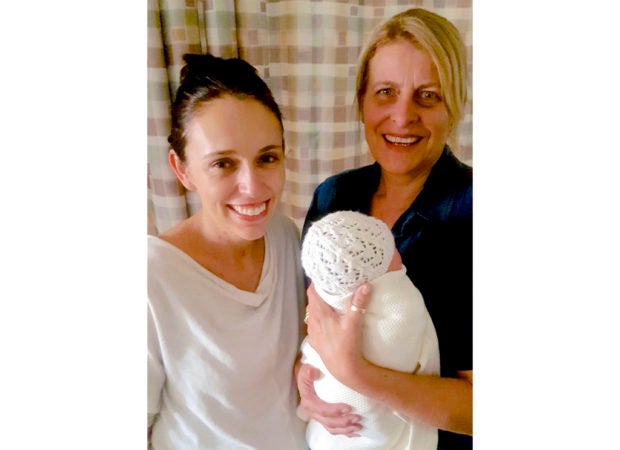 Wellington, New Zealand — New Zealand’s Prime Minister Jacinda Ardern was regaining her strength with macaroni and cheese on Friday and planned to spend at least one more night in an Auckland public hospital with her newborn girl.

Ardern on Thursday became just the second elected world leader to give birth while holding office.

Many hope the 37-year-old will become a role model for combining motherhood with political leadership.

Tributes have come in from around the world, including from Britain’s Queen Elizabeth II and from Google, which posted an image in the shape of a heart on its New Zealand homepage along with the message “Congratulations!”

“Not only is she incredible at what she does, this morning she made me macaroni and cheese because she heard me mention a wee craving yesterday,” Ardern wrote.

Ardern has not yet made a public appearance since giving birth or announced a name for the girl. She’d earlier said the quest to come up with a name had been going “terribly.”

Ardern’s partner Clarke Gayford spent Thursday night with Ardern at the hospital. He plans to become the primary caregiver for the child when Ardern returns to work following a leave of six weeks.

Deputy Prime Minister Winston Peters has taken over as the acting prime minister.
The last leader to give birth while holding office was late Pakistan Prime Minister Benazir Bhutto, who in 1990 gave birth to Bakhtawar.

The daughter this week congratulated Ardern on social media, noting that Ardern’s baby was born on Benazir Bhutto’s birthday. Bhutto, who would have turned 65, was assassinated in 2007.

“The baby was looking up at Jacinda and it looked like she was in awe of her and I couldn’t get over how alert it was just after being born,” she said. “So, I’m dying to see it and hold her and just see what’s she’s like.”

Laurell Ardern said she’d had people come up to her saying that her daughter had been an inspiration, including one woman who worried a job was too hard for her, but then thought ‘Well, if Jacinda can do it, I will do it.’

Former New Zealand Prime Minister Helen Clark said the birth and the way the country had greeted it would be seen as inspirational by advocates for gender equality and women’s empowerment.

“This is a sign of our maturity as a country and its acceptance that combining career and family is a choice which women are free to make,” Clark wrote in an email. “Let’s also celebrate Clarke as a modern man who is happy to be the full time parent of a young child.”   /vvp