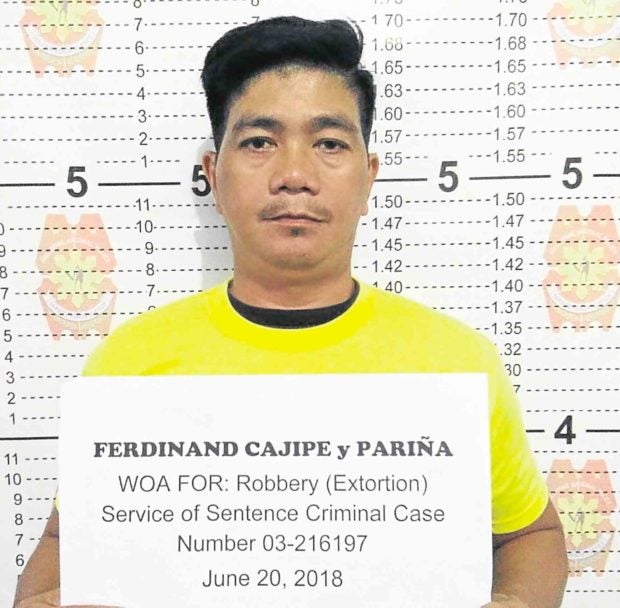 A policeman with alleged links to convicted drug lord Peter Co was arrested on Wednesday, more than 11 years after he was found guilty of robbery-extortion.

After going Awol (absent without official leave) last year, he was arrested at a supermarket in Guiguinto, Bulacan province, by a joint team from the NCRPO Regional Special Operation Unit forces and Guiguinto police.

According to the NCRPO, Cajipe’s bank account was found containing P7.72 million before it was frozen by the Anti-Money Laundering Council.

Eleazar explained that despite the alleged drug links and criminal charges that hounded Cajipe, the officer remained in the service.

He was assigned at the Police Security Protection Group until he went Awol last year when an arrest warrant was issued against him.

“We were remiss in our monitoring, letting him remain on duty. That needs to be improved,” Eleazar said.

In 2002, Myrna Germedia testified that Cajipe, along with three other policemen, threatened to frame her by planting “shabu” (crystal meth) as evidence, and took her money totaling P100,000.

Cajipe and his accomplices were found guilty by the Manila Regional Trial Court Branch 26 on March 19, 2007.

A petition for a writ of amparo in favor of Cajipe was later filed in the Supreme Court, but it was dismissed on Feb. 8, 2012.

Eleazar said Cajipe’s three coaccused had also been arrested. He said Cajipe also admitted to being a drug pusher but denied that the P7.72 million found in his bank account was meant for him.—WITH REPORTS FROM ANNA CAMPOS AND DANIELLE BOO

Read Next
Ping: PNP chief explaining ‘tambay’ drive raises suspicion
EDITORS' PICK
High inflation: Your P1 is now worth only 87 centavos
UK’s Boris Johnson will resign, BBC reports
Geek out at TOYCON 2022 powered by Smart Signature
House energy committee chair Arroyo bats for cheap electricity
High-risk pregnancy: Reducing your risk is in your hands
Unemployment rate up to 6% in May
MOST READ
Suspect in grisly killing of missing woman in Bulacan arrested
Hong Kong suspends flight bans as it eases COVID-19 rules
Kim Atienza’s daughter flaunts bikini body in response to critics of her ‘revealing photos’
Cop slain in Isabela ambush
Don't miss out on the latest news and information.