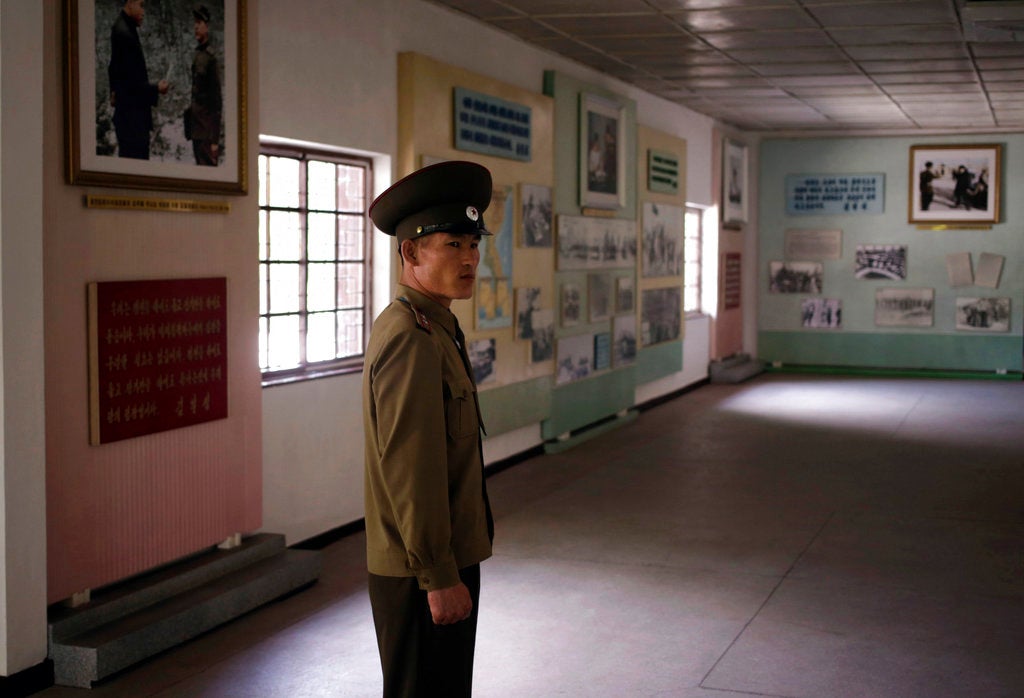 North Korean Army Lt. Colonel Hwang Myong Jin stands inside the museum of the armistice agreement between North and South Korea at the truce village at the Demilitarized Zone (DMZ) which separates the two Koreas in Panmunjom, North Korea, Wednesday, June 20, 2018. Hwang, who has been a guide on the northern side of the Demilitarized Zone that divides the two Koreas for five years, says that since the summits between North Korean leader Kim Jong Un and the presidents of South Korea and the United States, things have quieted down noticeably in perhaps the most iconic symbol of the one last place on Earth where the Cold War still burns hot. (AP Photo/Dita Alangkara)

PANMUNJOM, North Korea — Lt. Col. Hwang Myong Jin has been a guide on the northern side of the Demilitarized Zone that divides the two Koreas for five years. He says it’s gotten quieter here since the summits between North Korean leader Kim Jong Un and the presidents of South Korea and the United States, in perhaps the last place on earth where the Cold War still burns hot.

“A lot of things have changed. Listen to how quiet it is,” he said as he stood on the balcony of a large building overlooking the blue and white barracks and concrete demarcation line that mark the boundary between North and South.

“The South used to blast psychological warfare propaganda at us,” he said. “But since the summits, they have stopped. Now there is a peaceful atmosphere here.”

Indeed, all is quiet — deceptively so — in the DMZ these days.

On Wednesday, as Kim Jong Un was in Beijing for his third summit with Chinese President Xi Jinping, the northern part of the zone was buzzing with busloads of Chinese tourists taking selfies and eating ice cream cones outside the surprisingly well-stocked souvenir shop near the DMZ entrance.

A group of ethnic Korean high school students from Japan filed out of their tour bus as North Korean People’s Army soldiers watched disinterestedly with automatic rifles slung over their shoulders. Inside the souvenir shop, still more tourists, from Europe, looked over hand-painted propaganda posters. American tourists are still banned from visiting North Korea under an order issued last year by President Donald Trump that restricts all non-essential travel.

Though the DMZ has taken on something of a tourist trap atmosphere over the years — the South side is also a popular tourist destination and also has its share of kitschy souvenirs — Lt. Col. Hwang stressed that it remains first and foremost a military site.

“It’s not that we want tourists to come, but people want to see,” he said. “There are dangers.”

The dangers are, in fact, all around the DMZ, though they are invisible to the throngs of day-tripping tourists.

While world attention tends to focus on the North’s development of nuclear weapons, North Korea has for decades stationed most of its conventional fire near its border with the South. South Korea’s capital, Seoul, is only about 80 kilometers (50 miles) away from the DMZ and would be vulnerable to heavy artillery, and possibly chemical shells. Such an attack could cause hundreds of thousands of casualties.

Getting North Korea to agree to move at least some of its big guns away from the border will likely be a key topic of negotiations in the months ahead, particularly now that the U.S. and South Korea have agreed to halt their next set of annual war games, which never fail to outrage the North and heighten tensions on the peninsula.

Hwang generally follows a strongly patriotic and unapologetic script as he shows visitors around the usual spots — the building where the armistice that ended the 1950-53 Korean War was signed, a giant stone engraved with North Korean founder Kim Il Sung’s last words, various other spots where talks took place. He still stays strongly on message — his job is to get the North’s position across to the tourists, even if they aren’t especially interested in listening.

But he also pointed out a tree planted by Kim Jong Un and South Korean President Moon Jae-in when they held their first summit here in April, and the pavilion where Kim hosted Moon when he came to the North’s side last month. And when speaking to an American journalist, Hwang also seemed a tad less belligerent — or perhaps just a bit more relaxed — on Wednesday.

“War only brings disaster to our people. Nobody wants a war,” he said. “We held military talks with the South here, too. The talks are moving in the direction of what humanity wants. That’s peace. That’s a positive thing.”