Lawmakers have expressed concerns over the low availment of the livelihood and employment programs of the Department of Labor and Employment (DOLE) in Boracay Island, as well as the agency’s low utilization of funds almost two months after the shutdown of the prime tourist spot.

At Thursday’s hearing of the House committee on natural resources, DOLE Assistant Secretary Ma. Joji Aragon noted that the utilization rate of their P450-million budget for the six-month closure, as of Wednesday, is only at 24 percent, still far from their 85 percent utilization rate target by the end of the rehabilitation. 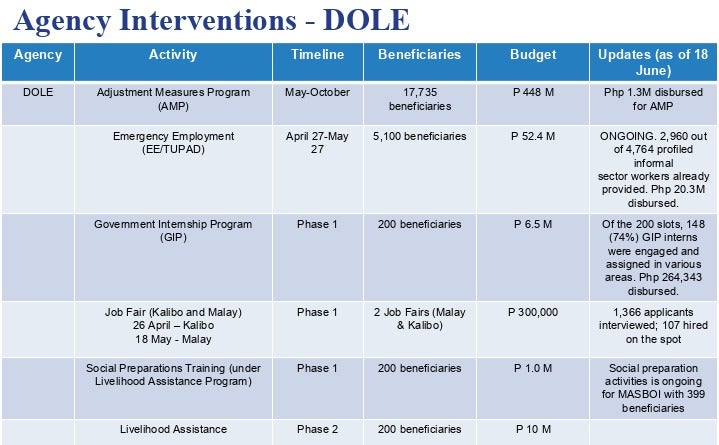 Aside from this, DOLE said it had assisted 148 under its government internship program, 399 under its social preparation trainings, and had conducted two job fairs.

The labor agency also said that out of the 24, 453 profiled workers in Boracay, 19,689 belong to the formal sector, while the remaining 4,764 were informal workers. DOLE’s number of profiled formal sector workers exceeded the local government of Malay’s record of 17, 735.

LPGMA Rep. Arnel Ty, committee chair, questioned why DOLE has only managed serving around 6,000 workers, and dispensing around P20 million, almost two months into the roll-out of the Island’s rehabilitation.

Aragon said “as of today ang nag-a-avail pa lang ng mga benepisyo na ‘to is around 5,800 affected and eligible workers.”

She said they have conducted enough information dissemination to inform workers of the programs and benefits they may avail from the government.

“Our regional and public information office there have gone around the local radio at nag-disseminate po sila ng impormasyon na lahat ng affected workers can avail and should avail of these government programs,” she said.

“The Labor Secretary also said perhaps we publish the names and addresses of those profiled. We share the same concern to increase the availment dahil para po sa kanila ito,” she added

Benitez has likewise asked Malay Mayor Ciceron Cawaling if he has been receiving complaints of difficulties in availing DOLE’s program.

Cawaling pointed out though that a lot of residents or workers have already availed of the government’s transportation subsidy and left the Island before it was even shut down.

Instead, he suggested the expansion of those qualified for the government’s programs, to include porters and bankers from nearby areas not covered, since “they are also affected by the shutdown of the Island.”

In light of this, Aragon assured that persons who have not availed and would still want to avail of DOLE’s programs in the coming days would still be accommodated by the agency as long as they submit one government ID and a certificate of employment.