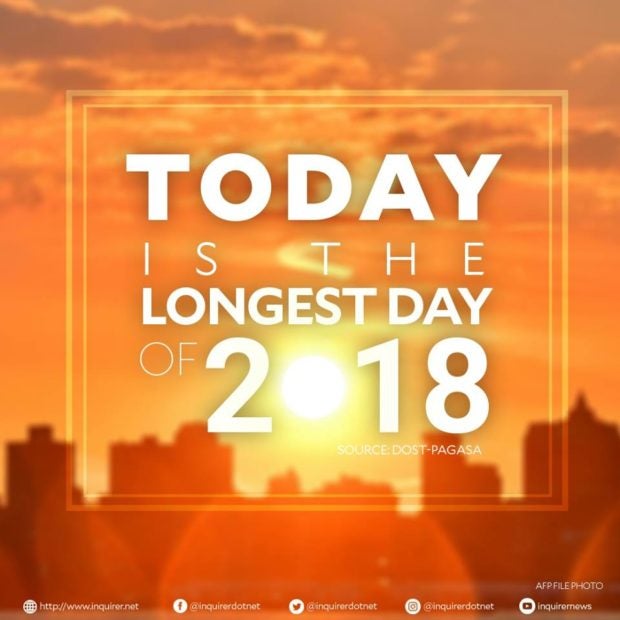 The Philippines and the rest of the world will experience this day (Thursday) the longest daytime for the year, the Greenwich Mean Time (GMT) indicated.

Also known as the summer solstice, this event will be followed by the start of shorter days and longer nights for countries located in the northern hemisphere of the globe, such as the Philippines.

According to GMT, the longest day this Thursday would last until 10:07 GMT, or at seven minutes after six o’clock in the evening in the Philippines (GMT+8).

GMT noted the situation is reversed for countries in the southern hemisphere, as they would experience their shortest day on Thursday. The shortest day for northerners is around December 21 each year, which in turn will be the longest day for southerners.

Scientists said solstices are caused by the slight difference in the distance of northern and southern hemisphere to the sun. As the earth’s axis is tilted to about 23.5 degrees, there will be instances where days on the north will be longer than the south and vice versa.

“Because of that tilt, the Northern Hemisphere sits a little bit closer to the sun than the Southern Hemisphere for half the year. That’s when it’s summertime in places such as Stockholm, Moscow, and Toronto,” Alejandra Borunda said in her article for the National Geographic on Wednesday.

“As Earth trundles along the second half of its orbit, the Southern Hemisphere faces the sun more directly, and it’s time for people in cities like Sydney and Buenos Aires to pull out the popsicles and sunblock,” she added.

Local weather bureau Philippine Atmospheric, Geophysical, and Astronomical Services Administration (Pagasa) said summer solstice is also the beginning of an “apparent southward movement of the sun in the ecliptic”.

“This is the time when the Sun attains its greatest declination of +23.5 degrees and passes directly overhead at noon for all observers at latitude 23.5 degrees North, which is known as the Tropic of Cancer,” Pagasa said in a bulletin on their website.

In the northern parts of the world where temperatures are naturally low and people rarely get sunlight, the summer solstice is a welcome development, as it is a sign that summer has arrived.

Many beliefs and doomsday predictions are being associated with the occurrence of the summer solstice. For pagans, the longest day symbolizes fertility and a good harvest. Thousands would gather annually in the Stonehenge, a prehistoric landmark in England, to celebrate and witness the rising of the sun to the highest possible altitude. /kga