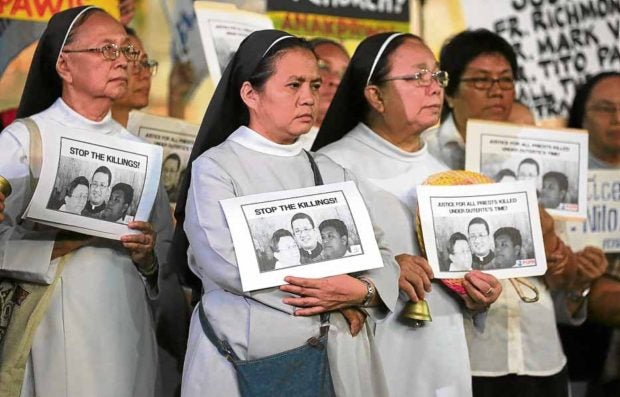 DEMAND FOR JUSTICE Catholic nuns join a gathering of church groups on Monday at Plaza Miranda in Quiapo, Manila, to demand justice for priests killed under the Duterte administration. —GRIG C. MONTEGRANDE

The Philippine National Police on Wednesday said it had received requests from nearly 250 priests and other religious workers to be allowed to bear arms outside their residences amid deep concerns over the killing of three priests in the past six months.

The applications for permits to carry, which are separate from permits to own firearms, were filed from June last year to June this year, according to PNP Director General Oscar Albayalde.

The permit to carry is issued only to a licensed gun owner whose life is under threat or in imminent danger, which requires a threat assessment certificate from the PNP.

But such a certificate would not be required if an applicant belongs to one of the professions “considered to be in imminent danger” and are exempted from submitting the certificate, including priests, ministers, rabbis and imams, lawyers, journalists, cashiers and bank tellers, physicians and nurses and high-risk businessmen.

Albayalde said there was no immediate information on whether the priests who applied for the permits to carry were facing death threats.

He also said the PNP had yet to check if applications for permits to own or carry had increased following the priest killings.

Several priests in Laguna province told the Inquirer on Saturday that they planned to arm themselves for self-defense.

But Archbishop Romulo Valles, president of the Catholic Bishops’ Conference of the Philippines (CBCP), “strongly” opposed the arming of priests, who he said were supposed to be men of peace.

The clergy and human rights groups were gravely alarmed by the deadly attacks on priests.

On Monday, members of church groups held a prayer rally and lighted candles at Plaza Miranda in Quiapo, Manila, demanding justice for the slain priests.

The latest victim, Fr. Richmond Nilo, 44, was gunned down inside a chapel in Zaragoza town, Nueva Ecija province, on June 10 while he was preparing to say Mass. One of at least six suspects had been arrested.

In April, 37-year-old Fr. Mark Ventura, known for his antimining advocacy, was gunned down after saying Mass in Cagayan province.

All Filipinos, including priests, have the right to own and carry firearms as long as they meet all the legal requirements and know how to  handle weapons properly, he said.

Albayalde said the PNP could provide gun training for priests.

Cebu Auxiliary Bishop Oscar Florencio, apostolic administrator of the Military Ordinariate of the Philippines, also opposed arming priests, saying it would just “create more chaos” and “not solve anything.”

Fr. Jerome Secillano, executive secretary of the CBCP public affairs committee, said priests must respect the decision of their bishops on whether they would be allowed to carry guns.

Balanga Bishop Ruperto Santos said he would not allow armed priests in his diocese.

“Sacrifices and sufferings are part and parcel of being priests. It is our calling, that is, to carry the cross and even to be crucified on the cross,” Santos said.