Members of the Akbayan Youth have staged a protest against the Philippine National Police (PNP) operations targeting loiterers at night, claiming that vagrancy has been long decriminalized.

(Loitering is not a crime.  The police’s arrest of thousands is alarming.  There is no law against loitering as it was already abolished last 2012.  PNP has also admitted that they do not have any guidelines for their operations.)

The group brought along placards insisting that loitering is not a crime in their #TambayProtest program, held near the Kalayaan Market in Barangay Central, Quezon City.

According to the group, this may be the biggest illegal detention case in the country as of the moment.

(Even people who are just outside the homes of their friends, and those who have not done anything illegal are arrested.  It is possible that this is the largest illegal detention case in the country today.) 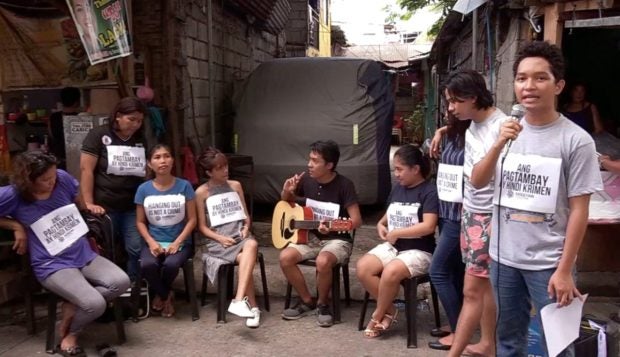 In a recent report, National Capital Region Police Office (NCRPO) Director Chief Supt. Guillermo Eleazar said that 7,291 individuals have been arrested from June 13 to Wednesday, June 20.  The numbers indicate that an average of 1,042 arrests per day within Metro Manila.

The PNP’s operations was borne out of a directive from President Rodrigo Duterte, who warned of jailing idlers whom he claimed are the source of crime in the streets.

(We need to monitor the thousands arrested by the PNP.  According to the law, a person cannot be jailed for more than 12 hours if there is no case against him or her.)

The group, which has been critical of the president, suggested that instead of arresting “tambays,” the current administration should focus on fighting the Tax Reform for Acceleration and Inclusion (TRAIN) law and the “endo” or end of contract policy.

They claimed that the TRAIN law and “endo” might be a big reason why the loiterers are in the streets in the first place.

(A lot of people loiter to make pass the time, chat with their neighbors, or to meet with their friends.  Several of the idlers are either laid off from work, those who cannot study, or those who have problems with the rising prices of commodities because of TRAIN.)

(Duterte has no solution for this: he is actually the cause of the growing numbers of loiterers in the streets.) /je

Read Next
Immigration a deeply divisive topic in Europe
EDITORS' PICK
Being a celebrity isn’t wholly an ‘advantage’ in the election, says Sotto
Acer starts the year off strong with the Aspire Vero National Geographic Edition
Octogenarian jailed for ‘stealing mangoes’ freed after people chip in for bail
Gov’t eyeing COVID-19 tests in pharmacies
Gear up and get ready to play with Yamaha Mio Gear
Over 3 Million worth of prizes to be won at Smart Padala’s SENDali Manalo Promo!
MOST READ
Imelda Marcos trends on Twitter after octogenarian jailed for allegedly stealing mangoes
Help pours in for octogenarian jailed for ‘stealing’ mangoes in Pangasinan
Natural immunity more potent than vaccines during US Delta wave—study
Bongbong Marcos-Sara Duterte tandem adds Zubiri, Gadon, Marcoleta to Senate slate
Don't miss out on the latest news and information.