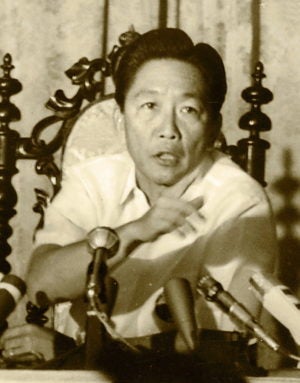 The Supreme Court has barred the government from recovering billions of pesos in behest loans that the late strongman Ferdinand Marcos allegedly granted to his cronies.

Voting unanimously, the high tribunal’s First Division threw out for lack of evidence the forfeiture case filed by the Presidential Commission on Good Government (PCGG) against Marcos and his wife, Imelda, (now an Ilocos Norte representative) and their close associates.

Behest loans are those extended by government financial institutions to private companies, or guaranteed on their behalf, on the orders of Marcos.

Filipinos are still paying these behest loans that run into tens of billions of pesos.

The high court’s ruling upheld the two previous decisions issued by the Sandiganbayan in 2010 and 2011, which tossed the PCGG’s complaint for the same reason.

The decision, promulgated on April 4 but made public only recently, was issued as the House of Representatives approved a bill abolishing the PCGG, the body created in February 1986 by President Corazon Aquino to recover the Marcos family’s ill-gotten wealth estimated to be between $5 billion and $10 billion.

The ruling was penned by Associate Justice Noel Tijam, who also wrote the unprecedented ruling that ousted Maria Lourdes Sereno as Chief Justice on May 11.

In rejecting the PCGG petition, the high court faulted the Office of the Solicitor General, which represented the PCGG, for its failure to present the original copies of the documents that purportedly showed that Marcos and his fellow respondents used their position in government to unlawfully accumulate wealth.

The Supreme Court said the antigraft court did not err when it asserted that state lawyers violated the best-evidence rule when they submitted mere photocopies of pertinent documents.

“[A]bsent preponderant evidence to hold otherwise, the [PCGG] failed to prove that the respondents by themselves or in unlawful concert with one another, accumulated or participated in the accumulation ill-gotten wealth insofar as the specific allegations in the subject complaint are concerned,” the court ruled.

The Supreme Court pointed out that Section 5, Rule 130 of the Rules of Court, mandated that a “photocopy, being merely secondary evidence, is not admissible unless it is shown that the original is unavailable.”

Although some of the respondents admitted that they obtained loans from government financial institutions, their action was “not the same as admitting that these were behest loans disadvantageous to the Filipino people or were used to amass ill-gotten wealth in concert with the [Marcoses].”

Akbayan Rep. Tomasito Villarin said the high court’s decision on behest loans showed its willingness to “appease the powers that be.”

Villarin said the Supreme Court “disregarded” the fact that the Marcos family and their cronies had amassed ill-gotten wealth from the public coffers.

He decried the tribunal’s reasoning that cited government lawyers’ presentation of mere photocopies instead of the original copies of the behest loan agreements that have been sealed in the vaults of the Central Bank.

Gabriela Women’s Party Rep. Emmi de Jesus said the decision was a “sharp insult to victims of martial law like me who have long fought for the recovery of the ill-gotten wealth of the Marcoses.”