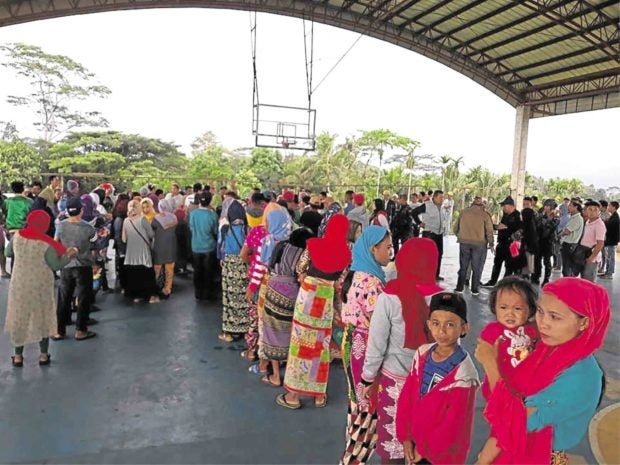 WAITING FOR AID Residents who fled their villages in Tubaran, Lanao del Sur, following military operations against the Maute group wait for food and other supplies at the town center.
PHOTO FROM LANAO DEL SUR LGU

“Reports said five Maute gunmen were killed but we could not say [these reports are] true. There is no body count,” he said.

In Calanogas town, soldiers held several people fleeing the military operations. “We held them for questioning. They said they were [evacuees]. We are verifying if they are indeed [evacuees],” Brawner said.

More than 1,500 families fled their homes in Tubaran and surrounding towns in Lanao del Sur as the military intensified its manhunt against Abu Dar’s group.

The provincial government has distributed food aid to evacuees who sought refuge at the town center of Tubaran.

Most of the families who fled their homes came from remote villages in the towns of Tubaran, Pagayawan and Binidayan, although some residents of Calanogas, Marogong and other areas near these towns were also leaving for fear of being caught in the crossfire.

Salma Jayne Tamano, Lanao del Sur information officer, said they were reaching out to other families after the military allowed the local government to conduct relief operations on Monday afternoon.

“There is no official report on the number of displaced families in Marogong yet but some of the more than 700 families who sought refuge in Binidayan are from that town while 49 families are in Bayang,” said Zia Adiong, spokesperson for the Lanao del Sur crisis management council.

He said Gov. Soraya Adiong had directed all provincial government agencies, especially the health and social welfare and development offices, to check on the needs of affected families.

“(We are looking for all available) accommodations for the displaced families,” Adiong said. “The Provincial Peace and Order Council has reconvened to assess the situation and avoid any spillover of the clashes to other towns,” he added.

Military operations, which started Friday last week, were focused on Tubaran on Tuesday. Air and ground assaults were aimed at “neutralizing” Marohombsar who, the military said, appeared to have assumed the post of new IS leader in Southeast Asia.

Adiong said the military had established checkpoints along entry and exit points of Tubaran. “But the hills served as the natural defense system of the terrorists,” he said.

Adiong said the primary concern of the provincial government was the safety of civilians.

“As much as possible we don’t want civilians affected because it would be devastating,” Adiong said, adding that the people of Lanao del Sur were still reeling from the impact of the five-month campaign against the Maute and Abu Sayyaf groups in Marawi from May to October last year.

“But if it’s the only way for the military to stop the spread of violent extremism, we will understand,” he added.

A P3-million reward had been offered by authorities for the arrest of Abu Dar, a native of Pagayawan, Lanao del Sur. Also known as Humam, Abu Dar was reported to be related to Faizal Marohombsar, a leader of the Moro National Liberation Front who was linked to the kidnapping of five Chinese engineers in Carmen town, North Cotabato province, in 2001. —Richel Umel and Divina Suson