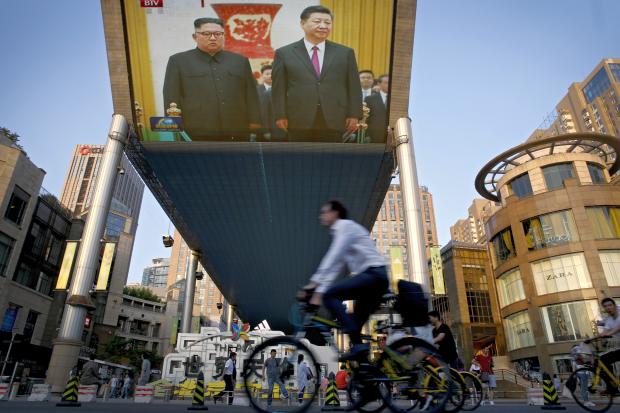 People bicycle past a giant TV screen broadcasting the meeting of North Korean leader Kim Jong Un and Chinese President Xi Jinping during a welcome ceremony at the Great Hall of the People in Beijing, Tuesday, June 19, 2018. Kim is making a two-day visit to Beijing starting Tuesday and is expected to discuss with Chinese leaders his next steps after his nuclear summit with U.S. President Donald Trump last week. (AP Photo/Andy Wong)

BEIJING — Chinese President Xi Jinping told North Korean leader Kim Jong Un on Tuesday he hopes Pyongyang and Washington can fully implement the outcome of last week’s nuclear summit at which Kim pledged to work toward denuclearization in exchange for US security guarantees.

State broadcaster CCTV said Xi told Kim that through the “concerted efforts of the relevant countries” negotiations regarding issues on the Korean Peninsula are back on track and the overall situation is moving in the direction of peace and stability.

The summit between Kim and US President Donald Trump in Singapore marked an “important step toward the political solution of the Korean Peninsula nuclear issue,” Xi was quoted as saying in the meeting at the Great Hall of the People in central Beijing.

China hopes North Korea and the U.S. can “implement well the outcomes achieved at the summit,” Xi said. China would “as always play a constructive role” in that process, he said.

Along with a statement signed by Kim and Trump offering vague commitments to denuclearization and security, Trump also agreed to suspend military exercises with South Korea in what was seen as a major win for North Korea and its chief allies, China and Russia.

Kim’s two-day visit to China, which began Tuesday, had not been announced in advance but was expected as part of the Communist neighbors’ tradition to report to each other on major developments.

The visit is Kim’s third to China since March, highlighting China’s crucial role in efforts by the U.S. and others to get North Korea to abandon its nuclear program.

The US has long looked to China to use its influence with North Korea to bring it to negotiations, but the visit comes as ties between Beijing and Washington are being tested by a major trade dispute.

CCTV showed Kim and his wife, Ri Sol Ju, being welcomed by Xi with full military honors. Xi and his wife, Peng Liyuan, later hosted Kim and Ri at a banquet, CCTV reported.

On the younger Kim’s first visit to China as leader, he took an armored train as his father had. His first two trips were not announced until after he had safely returned to North Korea.

Xi “is exerting a lot of influence from behind the scenes,” said Bonnie Glaser, senior adviser for Asia at the Center for Strategic and International Studies in Washington.

“I expect they will talk about the path going forward and where priorities should lie,” Glaser said. Those priorities, from China’s perspective, would be to ensure that Beijing is included in any peace treaty talks and in creating an environment on the Korean Peninsula that will make it unnecessary for U.S. troops to remain.

Kim is likely hoping to get China’s support for relief from punishing UN sanctions.

“China always stands against the so-called unilateral sanctions outside the Security Council framework. This position is very clear and we believe sanctions themselves are not the end,” Geng said.

While Beijing and Moscow have supported UN restrictions, they bristle at Washington imposing sanctions on its own to pressure North Korea.

Trump’s surprise announcement in Singapore of a US suspension of military drills with its South Korean ally fulfills a goal long pursued by North Korea and its primary backers China and Russia. That move is seen as potentially weakening defenses and diplomacy among America’s Asian allies, while bolstering China and Russia.

The US has stationed combat troops in South Korea since the Korean War, in which China fought on North Korea’s side and which ended in 1953 with an armistice and no peace treaty.

Cheng Xiaohe, an associate professor at Renmin University’s School of International Studies in Beijing, said it was significant that Chinese state broadcaster CCTV announced Kim’s visit before his return home.

“This is an improvement. This shows that China is moving toward a healthier and more normal direction in relations with North Korea,” Cheng said. He added that the frequency of Kim’s visits – three so far this year – was “unprecedented.”

Yang Mu-jin, a professor at the University of North Korean Studies in Seoul, said Kim’s visits show the recent chill in the two countries’ ties over Kim’s development of nuclear weapons and long-range missiles had fully lifted.

“I believe that indicates that the blood alliance between the North and China has been completely restored,” Yang said.

Washington has long pressed Beijing to use its influence to compel North Korea into negotiations, but Kim’s visit comes as a dispute over the large trade imbalance between China and the US has been escalating, moving them closer to a potential trade war.

That could make it less attractive for China to use its influence over North Korea to help the US achieve its objectives of denuclearization.

“The potential comprehensive trade war will make the cooperation between China and US in North Korea’s nuclear issue more complicated,” Cheng said. “There will be a big question mark over whether China and the U.S. will continue this cooperation.”

Read Next
NATO’s chief appeals for unity amid trans-Atlantic row
EDITORS' PICK
High inflation: Your P1 is now worth only 87 centavos
UK’s Boris Johnson will resign, BBC reports
Geek out at TOYCON 2022 powered by Smart Signature
House energy committee chair Arroyo bats for cheap electricity
High-risk pregnancy: Reducing your risk is in your hands
Unemployment rate up to 6% in May
MOST READ
Suspect in grisly killing of missing woman in Bulacan arrested
Bankrupt Sri Lanka asks Putin for fuel, tourists
Kim Atienza’s daughter flaunts bikini body in response to critics of her ‘revealing photos’
Bongbong Marcos’ first order: Abolish PACC, Office of Cabinet Secretary
Don't miss out on the latest news and information.