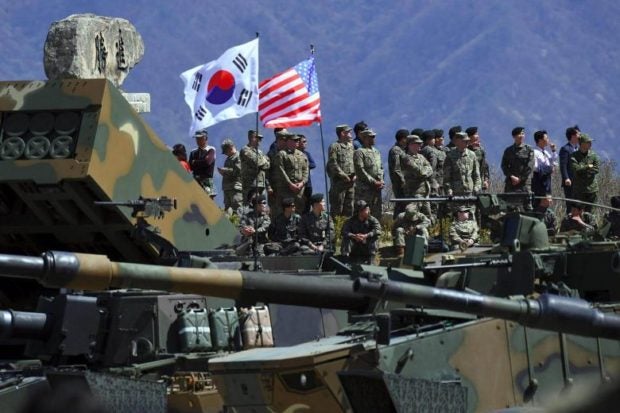 A file photo of South Korean and US soldiers watching from an observation post during a joint live firing drill at the Seungjin Fire Training Field in Pocheon, on April 26, 2017. AFP

WASHINGTON — United States President Donald Trump’s surprise announcement in Singapore on suspending war games with South Korea is being formalized on the ground, with an official announcement to put them on hold expected this week.

Meanwhile, Mr Trump took to Twitter yesterday to defend his decision, saying he had requested “holding back the ‘war games’ during the negotiations” with North Korea because the drills were “very expensive” and “set a bad light during a good faith negotiation”.

After meeting North Korean leader Kim Jong Un in Singapore last Tuesday, Mr Trump had pledged to end the joint military exercises, saying this would save the US “a tremendous amount of money”.

Yesterday, the US President tweeted that the exercises were “quite provocative” – a term used by the North for the drills that it sees as rehearsals for an invasion – but added that they could restart “immediately if talks break down, which I hope will not happen”.

Mr Trump also took aim at critics, including Democratic Senator Chuck Schumer, who had claimed that the US-North Korea summit was “all cattle and no hat”.

“The denuclearization deal with North Korea is being praised and celebrated all over Asia,” Mr Trump tweeted. “They are so happy! Over here, in our country, some people would rather see this historic deal fail than give Trump a win, even if it does save potentially millions and millions of lives!”

While experts have said the cancellation of the joint drills is part of security guarantees to make North Korea commit to denuclearization, there are concerns that the allies’ readiness to fend off North Korea’s aggression might be be weakened.

Former commander of the Pacific Command Harry Harris, Mr Trump’s pick for US ambassador to South Korea, told US lawmakers last week that North Korea continues to be a nuclear threat and that major military exercises should be paused to give Mr Kim a chance to prove whether he is “serious”.

The retired admiral also said postponing the exercises “for short periods of time” will not damage military readiness in that part of the world.

In a sign Seoul is open to suspending drills, South Korean President Moon Jae In said last Thursday that his government would need to be flexible on applying military pressure on the North if it was sincere about denuclearization.

Meanwhile, South Korea’s Yonhap news agency yesterday reported that the US and South Korea are expected to announce the suspension of “large-scale” military drills this week, with a “snapback” clause that they would restart if North Korea failed to keep its promise to denuclearize.

It said the suspension might cover only large-scale maneuvers and not routine military training.

South Korean media reported that the Ulchi Freedom Guardian, a computer-simulated exercise that is usually held in August for two weeks, will be the first to be affected.