Duterte promise: If there’s oil in marsh, Moros will own it | Inquirer News
Close
menu
search

Duterte promise: If there’s oil in marsh, Moros will own it 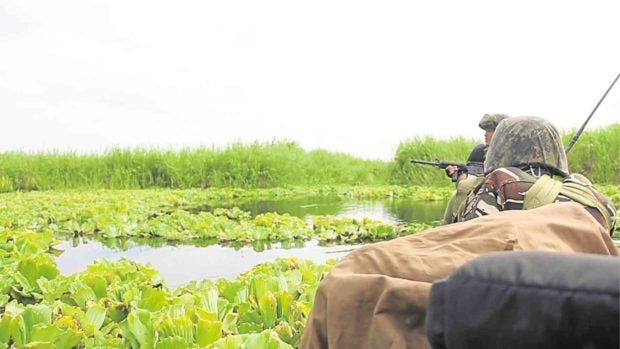 Any oil or gas found in the 330,000-square-kilometer Liguasan Marsh belonged to Moros, President Rodrigo Duterte said on Saturday.

In a pitch for the proposed Bangsamoro Basic Law (BBL), the President said one of the sources of anxiety among Moro communities was the supposed untapped resources of Liguasan Marsh.

“If there are trillions of cubic meters of oil, do not be worried at all,” the President said in a dialogue with Muslim communities during the celebration of Eid al-Fitr in Davao City.

“The government will not claim that, that’s yours,” he said, referring to oil and gas reserves believed to be untapped at Lake Buluan in Liguasan Marsh. The deposits were believed to be 68 billion cubic meters worth at least $1 trillion.

“I promise you, and that’s my commitment, it belongs to the Moro people. That’s yours,” the President said.

But the President said should the area yield that much gas and oil, the Moro people should not “forbid others” from partaking of the bounty.

“My God, all of them will come flocking [to Liguasan],” the President said.

“Christians, Muslims, ‘lumad’ will join the fray to enjoy progress and development,” he added.

He also reminded Moros that they would need to pay taxes to the national government if oil and gas were found in Liguasan.

Under the BBL, the area “will remain in your control and possession,” the President said. “But you just have to pay taxes,” he said.

After starting the operations of an oil field found in Alegria town, Cebu province, the President blamed lack of oil for the Philippines’ slow progress.

But the proposed BBL was unclear over control of Liguasan Marsh.

The Senate and House versions of the proposed measure stated that fossil fuel deposits found in areas covered by the new autonomous region proposed by the BBL shall be “comanaged” by the autonomous and national governments.

The two bills stated that there shall be “joint exploration, development and utilization” of resources within the autonomous area.

But income from all other resources, including metals, shall “pertain fully to the Bangsamoro government.”

The House and Senate passed their versions of the BBL earlier this month.

Excitement over resources in Liguasan was generated by the claim made by Rep. Zajid Mangudadatu, who had said the area beneath Lake Buluan contained 68 billion cubic feet of gas, citing a government survey.

In his pitch for the BBL, the President said he would try to convince Congress to pass the proposed measure without “cuts.”

“I’m sure the Speaker would agree with me,” the President said at the gathering of at least 650 Moro leaders and government officials.

He said he was consulting with Moro leader Nur Misuari because he wanted to make the new autonomous setup “inclusive.”

Misuari’s Moro National Liberation Front also has a peace agreement with the government.

Ebrahim said the BBL faced hurdles like “parochial political interests, ingrained biases, ignorance and fear, and even arrogance from the powers that be.”