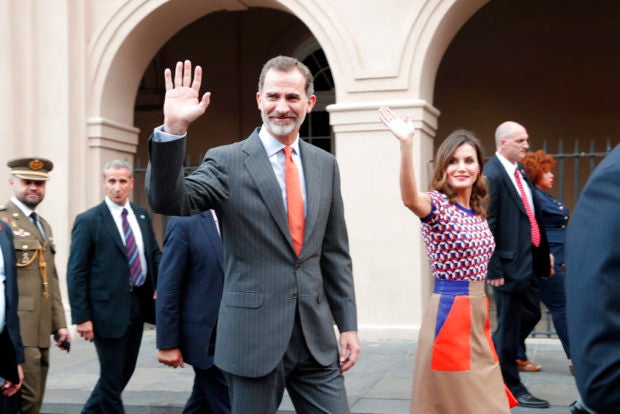 King Felipe VI and Queen Letizia of Spain walk from the Cabildo to St. Louis Cathedral in New Orleans, Friday, June 15, 2018. They are in New Orleans to help celebrate the city’s 300th anniversary, which was colonized by Spain from 1763 to 1802. Image: AP Photo/Gerald Herbert

NEW ORLEANS (AP) — Following a red carpet arrival Saturday at the New Orleans Museum of Art, King Felipe the VI and Queen Letizia of Spain enjoyed music by a jazz group and a cultural performance by Mardi Gras Indians as they ended a visit to the city celebrating its tricentennial.

After a private lunch with New Orleans Mayor Latoya Cantrell, Louisiana Lt. Gov. Billy Nungesser and other dignitaries and officials, the royals departed New Orleans for San Antonio, Texas, which is also celebrating 300 years of existence. 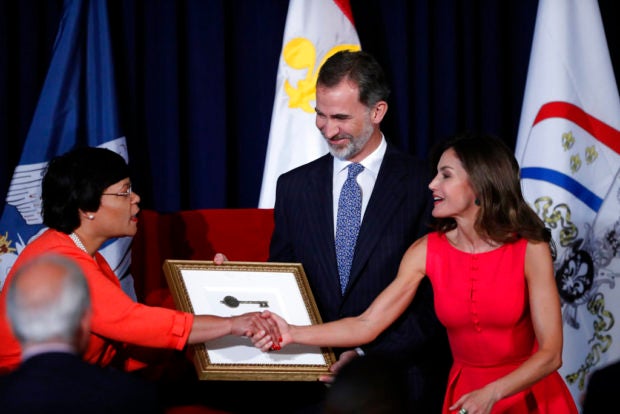 King Felipe VI and Queen Letizia of Spain receive ceremonial keys to the city given to them by New Orleans Mayor LaToya Cantrell, left, at a welcoming ceremony at Gallier Hall in New Orleans, Friday, June 15, 2018. They are in New Orleans to help celebrate the city’s 300th anniversary, which was colonized by Spain from 1763 to 1802. Image: AP Photo/Gerald Herbert

“It was a great and amazing weekend for the city, our residents and the King and Queen for them to come back to a former Spanish colony,” said Trey Caruso, a spokesman for Mayor Cantrell’s office.

Clarinetist, music historian and Xavier University Spanish professor Michael White said he and his Original Liberty Brass Band played two pieces with a connection to Europe and New Orleans at the New Orleans Museum of Art.

The first piece is “Panama,” a march in the traditional European style.

“It was published in 1911, and all over the country it was played by and read by brass bands,” White said prior to the performance. “But in New Orleans they kind of threw away the sheet music and improvised, and therefore made it personal. I think it’s a good way to show the interaction between European culture and New Orleans culture.”

The second piece, “Andalusian Strut,” is one of White’s own compositions. It combines a common flamenco structure and flamenco-type rhythms and melodies with classic New Orleans jazz blues style and improvisation, he said.

“That one went over really, really well,” White said after the event. “The King and all of the people there really loved it.”

White said their third song was “When the Saints Go Marching In,” which White describes as “probably the most famous song in New Orleans history.”

“We surprised them by singing the chorus in Spanish,” he said.

The Mardi Gras Indians, groups of African-Americans who create elaborate feathered and beaded costumes in which they strut and dance through the streets on Mardi Gras, performed as well.

“Though the program was relatively short, I think overall it gave a good idea of New Orleans’ culture,” White said.

Felipe and Letizia flew in Thursday evening to Louisiana, which was a Spanish colony from 1763 to 1802. They arrived at New Orleans’ airport at sunset and were greeted by several officials including Louisiana Gov. John Bel Edwards and Cantrell. 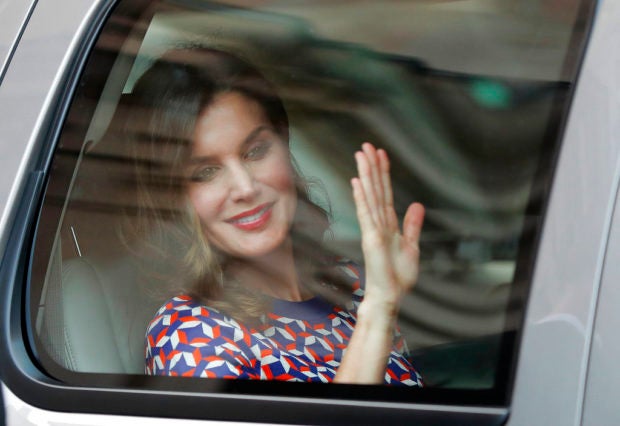 They saluted New Orleans’ centuries-old Spanish heritage at an event Friday at Gallier Hall, a former City Hall opened in 1853 and renovated for the city’s 300th anniversary. That evening, they visited two buildings erected under Spanish rule: St. Louis Cathedral and the Cabildo, the Spanish government seat in Louisiana.