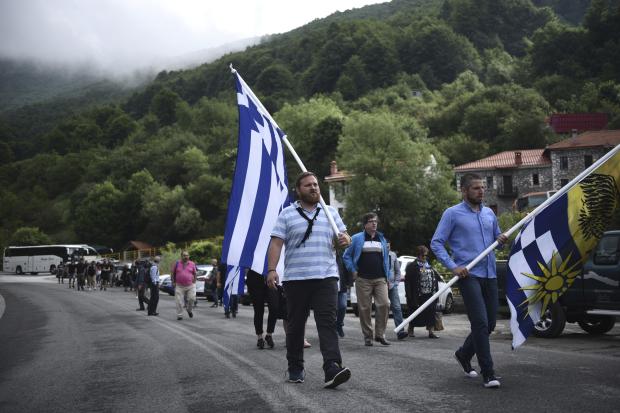 Opponents of the deal between Greece and Macedonia on the latter country’s new name – North Macedonia – carry Greek flags as they gathered to protest at the village of Pisoderi near the border with Macedonia in northern Greece, on Sunday, June 17, 2018. Police blocks did not allow them to get near the site where the agreement was signed, so the protest was staged 35 km (22 miles) away. (Photo by GIANNIS PAPANIKOS / AP)

PSARADES, Greece — Greece and Macedonia are about to sign a deal that, if ratified, will resolve a decades-old dispute concerning Macedonia’s name.

The village of Psarades, on the shore of the Great Prespa lake, was chosen as a symbolic site, since it lies near where the borders of the two countries, as well as Albania, meet.

Zaev is to arrive by boat from across the lake, to be greeted by Tsipras.

Police have cordoned off all approaches to the village to prevent protesters from reaching the site. A protest by nationalists will be staged almost 40 kilometers (25 miles) away.