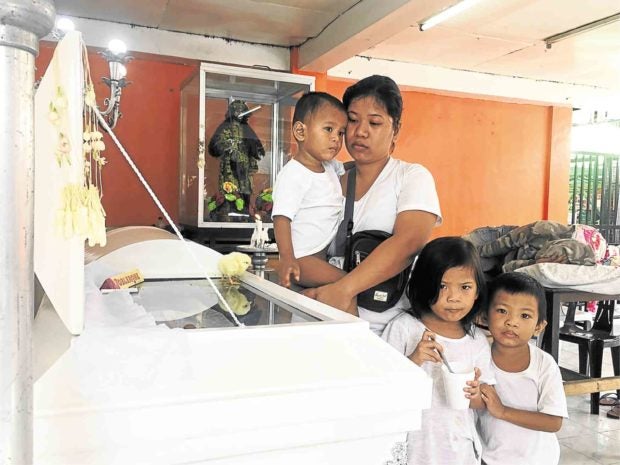 THE DIMALANTAS The widow Michelle and children Alexander, 2; Alexa, 4; and Alexis, 4. Not in photo is Axel John, 10 months. —KRIXIA SUBINGSUBING

In a small multipurpose hall in Sta. Cruz, Manila, where the shanties and houses rattle every now and then as trains pass through the neighborhood, Alexander Dimalanta’s family mourns his death so close to Fathers’ Day.

On June 14, the 25-year-old tricycle driver was shot dead inside the Manila North Cemetery after allegedly shooting it out with police officers during a drug buy-bust operation.

Dimalanta left behind a widow and their four young children, who remember him as a loving dad.

“I still don’t know how to even begin, let alone explain to them, that their father is gone,” Dimalanta’s partner, Michelle, 25, said. “To be orphaned so close to Father’s Day seems like the cruelest kind of tragedy.”

Dimalanta is among the latest victims in the Duterte administration’s bloody war on drugs which rages in poor communities like the back alleys of Sta. Cruz.

It has killed mostly male breadwinners, leaving behind what its critics call “a nation of widows and orphans.”

Felled by several bullets to the chest, he was rushed to the nearby Chinese General Hospital but died from his wounds.

Michelle insisted that her partner was a loving husband and a doting dad.

“Even if we were neck-deep in debt he could never have done that, not ever,” she said. “I swear on my children, even if you cut his corpse open and test him for drugs.”

Dimalanta was “kindhearted and generous,” swore his younger sister Vina.

On the day he died, she said, he even volunteered to help out fellow tricycle driver Marvin Rosario convey two female passengers.

They said two female strangers alighted at the far end of 2nd Street and then inexplicably walked back to where they came from.

Police officers in civilian clothes suddenly appeared and hauled two men to the edge of the cemetery.

One of the residents said he saw Dimalanta being forced into a narrow alley between tombs. “The police warned us to leave, so we ran like hell. We all heard at least 12 gunshots,” he said.

Police then hailed a passing tricycle to rush Dimalanta’s body to the hospital.

Rosario was also arrested and later detained at the Sta. Cruz station. But the spot report on his arrest did not say he was with Dimalanta during the shooting.

Instead, it said Rosario was arrested at 2 a.m. on June 15 at the cemetery for gambling and drug possession.

The Inquirer tried to reach out to the station commander, Supt. Julius Domingo, but was told he was out.

Because he only finished grade school, Dimalanta had been a tricycle driver for most of his life, Michelle said.

His parents separated and left with their new partners when he was still young, so he had to look after his two sisters.

Michelle said he was also nursing a kidney ailment but spent his meager income on diapers and food.

“He was the type to skip meals and drive twice as long just to earn a little extra,” Dimalanta’s elder sister Joan said.

Underneath the hard work, however, was a breadwinner’s desperation and exhaustion, embodied in a brief note Dimalanta wrote on his cell phone two days before he died.

It read: “Lord, please help me. I don’t know what else to do. I can’t take it seeing my family suffer. I love them very much but I can’t do much more … I don’t wish to do evil.”

“It was so hard for him but he never wanted us to worry,” Michelle said. “Day after day, we both struggled to make ends meet … How can we now survive without him?”

Dimalanta’s death cut short his promise to take his family out for a meal to celebrate Father’s Day, Michelle said.

They were supposed to go to Mass at Quiapo Church on Sunday to thank the Lord for healing the kids, who were all stricken with chicken pox last month.

“It’s his birthday,” his eldest daughter Alexa said, or so she thought. “We were going to eat out. I even have a gift for him, but it’s a secret.”

Her father is “dead,” she said, although she does not know what it means. “Mama said he won’t be back. But last night he told me to eat first.”

She misses her dad, something that Michelle knows she would have to reckon with when they bury him.

“It’s only going to get harder from now on,” Michelle said. “But we’re determined to fight. We’re sure Alex can’t rest until we bring him justice.”