‘This is war on Church’ | Inquirer News

‘This is war on Church’ 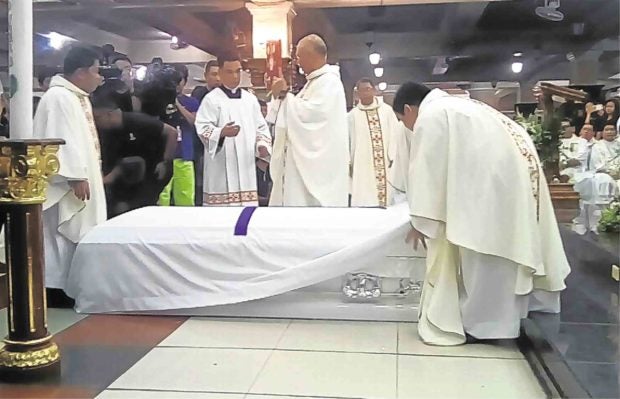 A group of activist priests, nuns and laymen is organizing a protest rally on June 21 to show indignation over a series of killings of priests that one of the group’s leaders said raised suspicion that the murders were connected with President Rodrigo  Duterte’s hostility toward the Church.

Fr. Robert Reyes, spokesperson of the group Gomburza, said the killing of Fr. Richmond Nilo, of the diocese of Cabanatuan, Nueva Ecija, reinforced his belief that attacks on priests were related to the President’s public rants against the Church.

But presidential spokesperson Harry Roque brushed off the allegations, saying the President would never order the killing of priests.

Roque instead linked attacks on priests to a campaign to discredit the Duterte administration’s war on drugs and criminality.

Reyes said the timing of the attacks was uncanny.

They came after the President’s “blasphemous attack on the Church and the repeated and consistent slander on Catholic Church leaders,” said Reyes, who had earned the moniker “running priest” for organizing long-distance runs for social causes.

The President’s rants against the Church and its leaders and the attacks on priests “constituted another war” by the Duterte administration. “The war on the Catholic Church,” Reyes said.

Reyes said that while the Church did not advocate retaliation, “neither will we withdraw into cowardly silence.”

He said the Church could not just keep silent as it was attacked and its leaders were killed.

“While we are people of peace and nonviolence, we cannot respond to malice with meekness and timidity,” said Reyes.

The President has repeatedly ranted against the Catholic Church for criticisms aired by some Church leaders against the bloodshed that came to be associated with the President’s campaign against drugs and crimes.

He had claimed to have been a victim of sexual molestation by a priest when he was still studying at Ateneo de Davao.