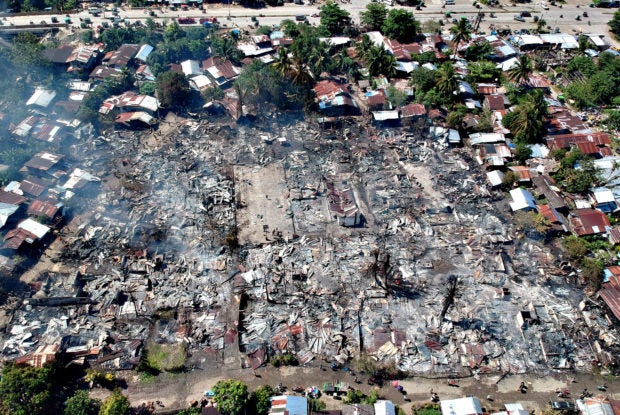 An aerial view of the area engulfed by the massive fire that left 150 families homeless in a fire that burned down 126 houses in Bayugan City, Agusan del Sur province. INQUIRER Mindanao / Erwin Mascariñas

BUTUAN CITY—The Eid’l Fitr celebrations turned tragic for residents of a Muslim community in Bayugan City in Agusan del Sur when a fire gutted 126 houses amid the revelry on Friday.

Authorities said no one was hurt in the fire that lasted for about three hours on Purok 1A in Barangay Taglawan.

However, 150 families were initially listed as displaced in the fire that authorities said was the largest to hit Caraga region this year.

“We fear that (the number of displaced families) might rise as the course of the investigation moves along, since the houses in this area are mostly made up of shanty or improvised shacks and some are constructed just next to another,” said Fire Inspector Paul Jorge Barrozo, the Bayugan City fire marshal.

Barrozo said they received the fire alarm at 10:57 a.m. and fire engines from Bayugan City reached the fire scene in less than five minutes.

“Unfortunately, due to the intense heat of the day, the dry wind and most of the houses are made up of light materials, the fire quickly spread and grew out of proportion prompting us to call other fire departments in Agusan del Sur,” he said, adding that the fire alarm was eventually raised to level 4.

Barrozo said firefighters from the towns of Sibagat, Esperanza, and Prosperidad, as well as rescuers from the Search and Rescue Agusan del Sur (SARAS) arrived to help.

He said the cause of the fire is still being investigated although some residents claimed they heard firecracker explosions prior to the spread of fire.

Most of the people residing in the area are traders and some allegedly sold firecrackers during the holidays. /jpv