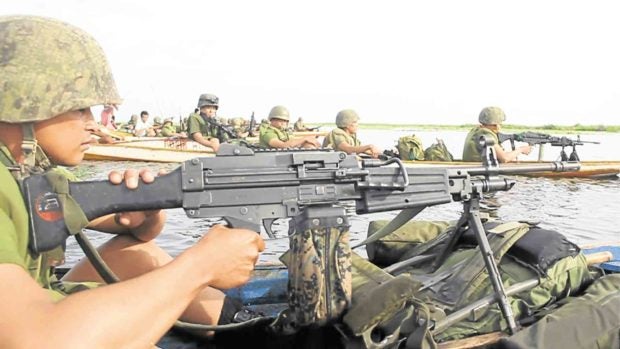 CAMP SIONGCO, MAGUINDANAO—The military operation against Islamic State (IS) followers operating in Liguasan Marsh had freed fishing areas from the control of terrorists, including foreigners, according to the military.

The operation, which killed at least 23 of the gunmen, was prompted by pleas for help from fishermen who reported being driven away at gunpoint from the marsh by IS gunmen.

One of them was a fisherman who identified himself only as Jamadel, 40, who said he and his fellow fishermen were unable to fish for months in the SK Pendatun portion of the marsh because terrorists had been driving them away.

“We’re like the Filipino fishermen turned away from the West Philippine Sea,” Jamadel said.

“This time, not by the Chinese but by Indonesians,” Jamadel told reporters here on Friday.

He said he and his sons tried to catch fish in an area in the marsh near their village of Midpandacan but “there were Indong-Indong (Indonesian) armed men who did not want us there.”

“Me and the other local fishermen are angry,” Jamadel said. “Our livelihood depended on catching fish,” he added.

Fishermen usually catch mudfish and catfish in Liguasan Marsh, which has an area of at least 220,000 square kilometers that straddles 29 towns in two provinces—Maguindanao and North Cotabato.

So what Jamadel and the other fishermen did was report to the military about the presence of the gunmen, some of whom were foreigners.

The BIFF had been insisting on a separate Islamic state, not just an autonomous region for Muslims, in Mindanao.

Cabunoc said the military, prompted by the fishermen’s reports, launched massive operations starting on June 10 that saw an IS camp in Liguasan destroyed by aerial strikes and artillery fire.

Cabunoc said the destruction of the IS camp and bomb-making facility had elated fishermen like Jamadel.

“They are now free to do what they used to do—fish in the vast Liguasan,” Cabunoc said.

“The gunmen had been making life difficult for fishermen when they were prevented from fishing in the area,” Cabunoc said.

He said a soldier paid dearly with his life to make sure that fishermen in the Liguasan area were not harassed by terrorists.

Cabunoc said the military continued to hunt the remaining IS gunmen to prevent their return to the marsh and to protect fishermen.

“We have three enemies here—armed men, mosquitoes and man-eating crocodiles that abound in the area,” he said.