Duterte: I have no interest in Boracay or its half-naked ladies | Inquirer News
Close
menu
search

Duterte: I have no interest in Boracay or its half-naked ladies 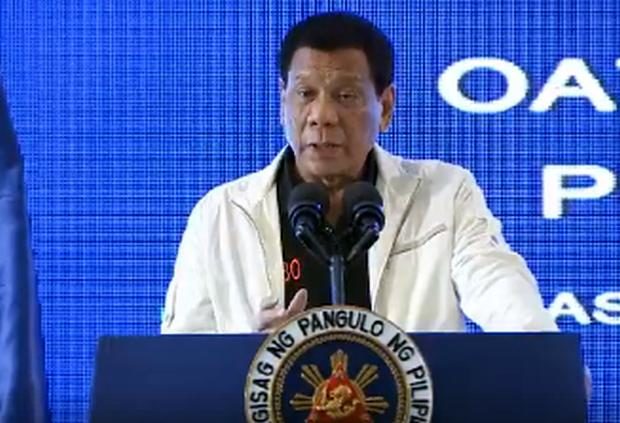 STA. ROSA CITY—President Rodrigo Duterte said neither he nor anyone in his cabinet has interest in Boracay, the Philippines’ world-renowned beach island that the government recently ordered closed for rehabilitation.

Speaking before more than 4,000 village chiefs from Cavite, Laguna, Batangas, Rizal, Quezon on Thursday, Duterte reiterated his plan to place majority of the island under a land reform program.

The President also said it would “not hurt (him) so much” should the land beneficiaries, who he said would be members of the Ati tribe, later on decide to sell their lands.

“I am not interested in Boracay. I don’t bathe in the sea and I also do not like looking at half-naked ladies… There are a lot of them there who remove their bra,” Duterte said of the beach goers who once

filled the island resort before the government closed it to tourists in April.

Drawing chuckles from the audience, Duterte mentioned Environment Secretary Roy Cimatu, to whom he gave the order to rehabilitate Boracay due to its pollution problems.

“Next day, on the newspaper, I saw him (Cimatu) walking on the beach but his eyes were clearly looking at a naked lady. I said to Cimatu: ‘I thought I gave you an order…why did you spend most of your time

“I have no interest there. No cabinet member is interested there. The opposition…men judge best when they condemn,” Duterte said.

In April, Malacañang denied reports that closing the island was meant to pave the way for the construction of foreign-owned casino resort.

Duterte said he would not mind if Boracay, several years from now, might end up with private commercial or residential owners, as long as the original tenants have benefited from it. However, rules under the Department of Agrarian Reform prevent the sale of awarded lands within 10 years.

“The idea is like the land reform. They said: ‘mayor, the land reform was a total failure because they sold the awarded lands.’ I replied, no problem, it does not really hurt me so much. Let them sell it, at

least the tenant has held millions or thousands of pesos from the sale that they might never have held ever,” he said.

Duterte maintained that he is not inclined to “proclaim” some portions of the island for commercial use, but is leaving it up to the Congress to cut a strip—“from the lowest to the highest point where the water

reaches during high or low tide and you can count maybe one kilometer” for businesses.

“To the rich, if you think you can build your chalet bungalows, forget it…I did not spend millions of pesos cleaning Boracay just to give it to the rich,” Duterte said. /jpv

Duterte says Boracay for all Filipinos, not just rich