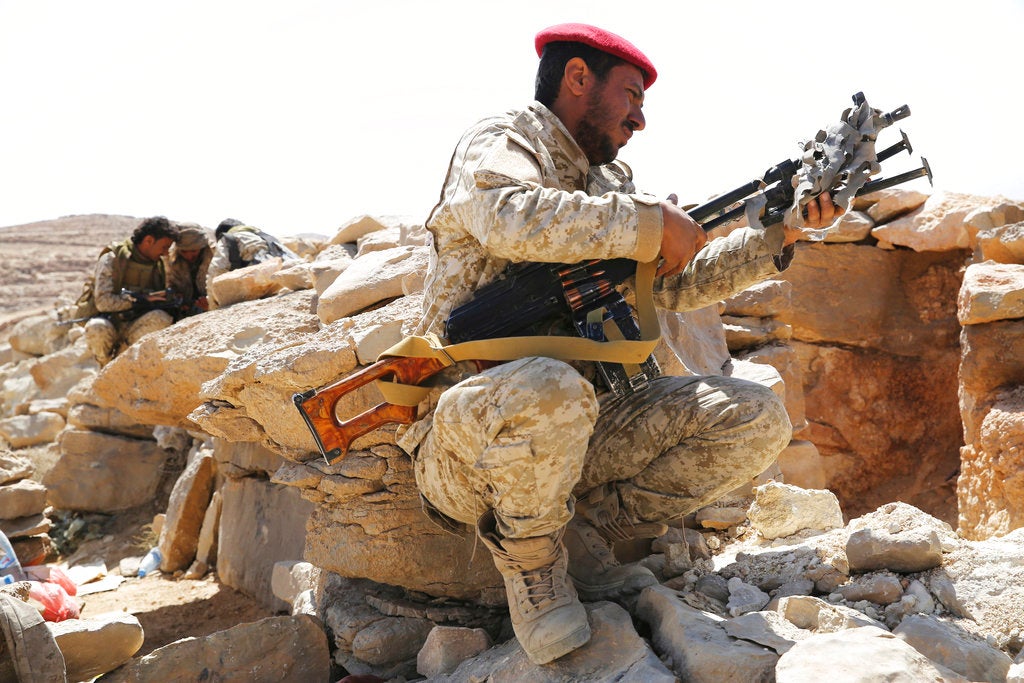 FILE – In this Friday, Feb. 2, 2018, file photo, a Yemeni soldier allied to the country’s internationally recognized government unslings his machine gun on the outskirts of Sanaa, Yemen. Yemen’s yearslong war between Shiite rebels and a Saudi-led coalition backing its exiled government has escalated with an assault on the insurgent-held port city of Hodeida. (AP Photo/Jon Gambrell, File)

SANAA, Yemen — The Saudi-led coalition backing Yemen’s exiled government captured a town south of the port city of Hodeida on Thursday as fierce fighting and airstrikes pounded the area on the second day of an offensive to capture the strategic harbor that is the main entry point for food in a country teetering on the brink of famine.

A Saudi military spokesman said the forces were drawing closer to the Red Sea port in a campaign aimed at driving out Iranian-aligned Shiite rebels known as Houthis, who have held Hodeida since 2015, and breaking the civil war’s long stalemate.

International aid agencies and the United Nations have warned the assault could shut down the vital aid route for some 70 percent of Yemen’s food, as well as the bulk of humanitarian aid and fuel supplies. Around two-thirds of Yemen’s population of 27 million relies on aid and 8.4 million are already at risk of starving.

The United Arab Emirates ambassador to U.N. agencies in Geneva maintained the Saudi-Emirati coalition had no choice but to act.

“Should we leave the Houthis smuggling missiles?” Ambassador Obaid Salem al-Zaabi told a news conference. “This comes from this seaport. We already gave the United Nations the chance to operate from this seaport, and (the Houthis) refused.”

The ambassador’s comments contradict the conclusions of a U.N. panel of experts that said it was unlikely the Houthis were using the port for smuggling arms. In a report in January, the panel cited the fact that ships coming into the port face random inspections, require U.N. approval and that no weapons have been seized since March 2017.

The U.N. and Western nations have accused Iran of supplying the Houthis with weapons, from assault rifles to the ballistic missiles they have fired deep into Saudi Arabia, including at the capital, Riyadh. Over 150 ballistic missiles have been fired into the kingdom by the Houthis, according to Saudi officials.

On Thursday, a senior UAE official said the Trump administration has rejected requests for military assistance in the coalition attack on Hodeida. The requests were for aerial satellite imagery, other surveillance and reconnaissance, and minesweeping, said the official, who spoke on condition of anonymity because he was not authorized to publicly discuss the matter.

The U.S. has not publicly opposed the assault but has urged the coalition to ensure that humanitarian aid deliveries to the port continue.

The port remained open on Thursday, according to the Norwegian Refugee Council, which cited information from the U.N. There were “four vessels filled with food and fuel at berth” and another five vessels anchored nearby, it said.

“People in the governorate have reported heavy airstrikes along coastal areas and roads in districts south of Hodeida,” the council said. “No direct attacks have been reported within Hodeida city itself, despite the overhead presence of fighter jets.”

Late Thursday, Saudi Arabia’s U.N. ambassador said there were two ships, each carrying 5,000 tons of food, ready to dock immediately at the port of Hodeida.

Abdallah Al-Mouallimi said the ships — from Saudi Arabia and the United Arab Emirates — are part of coalition efforts “toward ensuring abundant humanitarian supplies” to Hodeida during the offensive.

Col. Turki al-Malki, a Saudi military spokesman, said coalition forces were some six kilometers (three miles) from the airfield, in an interview with the Saudi-owned satellite news channel Al Arabiya.

Meanwhile, Col. Aziz Rashed, the spokesman for an army unit allied with the Houthis, told a news conference in the capital, Sanaa, that the rebels foiled a naval attack by government forces backed by the Saudi-led coalition in waters off Hodeida. He said the rebels had countered “hostile naval warships” off the coasty of al-Olifika, to the south.

The Saudi-led coalition launched the assault on Hodeida on Wednesday, raising warnings from aid agencies that Yemen’s humanitarian disaster could deepen and that the offensive could set off prolonged street-by-street battles, inflicting heavy casualties.

“Any closure of the port, even for a few days, will have a dramatic impact on the humanitarian operations in the country,” the U.N. Humanitarian Coordinator for Yemen, Lise Grande, told The Associated Press Thursday.

“There is no substitute for Hodeida. Everything depends on that port,” she said.

Late Thursday, Yemen’s Foreign Minister Khaled Alyemany told a group of U.N. reporters in New York that military operations by the Saudi-led coalition are not taking place near the port but in an area close to the airport.

The coalition’s initial battle plan appears to involve a pincer movement. Some 2,000 troops who crossed the Red Sea from an Emirati naval base in the African nation of Eritrea were awaiting orders to move in from the west after Yemeni government forces seize Hodeida’s port, Yemeni security officials said.

Emirati forces with Yemeni government troops moved in from the south near Hodeida’s airport, while others sought to cut off Houthi supply lines to the east, the officials said. They spoke on condition of anonymity as they weren’t authorized to brief journalists.

Four Emirati soldiers were killed in Wednesday’s assault, the United Arab Emirates’ state-run news agency said, but gave no details of how they died. Al-Zaabi, the UAE ambassador in Geneva, said they died in the Hodeida campaign, without elaborating.

Hodeida is some 150 kilometers (90 miles) southwest of Sanaa, Yemen’s capital, which has been in Houthi hands since September 2014. The Saudi-led coalition entered the war in March 2015.

The United Nations and other aid groups already had pulled their international staff from Hodeida ahead of the assault. In a press statement on Thursday after an emergency closed-door meeting, the U.N. Security Council again called for Hodeida and the port of Saleef to be kept open and reiterated support for a political solution to the three-year conflict.

More than 10,000 people have been killed in Yemen’s civil war, which has displaced 2 million others and helped spawn a cholera epidemic. Saudi-led airstrikes have killed large numbers of civilians and damaged vital infrastructure.

The coalition has blocked most ports, letting supplies into Hodeida in coordination with the U.N. The air campaign and fighting have disrupted other supply lines, causing an economic crisis that makes food too expensive for many to afford.  /muf