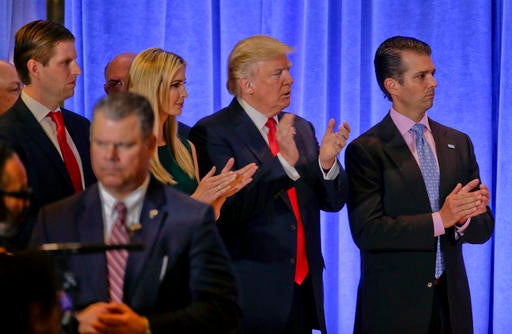 New York, United States – President Donald Trump, his sons and daughter, were accused on Thursday of “persistently illegal conduct” at their family foundation, in a lawsuit alleging the Trump misused charity funds to finance everything from his election campaign to a portrait of himself.

According to the suit, the real estate tycoon used foundation funds to settle lawsuits, promote his Trump-branded hotels, and for personal spending – including the purchase of a portrait that was then mounted on the wall at one of his golf clubs.

The civil lawsuit, filed on Trump’s 72nd birthday, marked a new addition to the legal woes facing the White House, ranging from lawsuits from two women claiming affairs with Trump, to the sprawling probe into his campaign’s ties with Russia and obstruction by Special Counsel Robert Mueller.

But while it carries the threat of multi-million dollar financial penalties, and the closure of the charity, the New York suit is unlikely to lead to criminal charges against the president or his children, or to strengthen the case of those seeking his impeachment.

Trump branded the lawsuit a “ridiculous case” drummed up by “sleazy New York Democrats,” and indicated he will fight it.

The suit raised a new challenge to the president just as he returns from a ground-breaking summit in Singapore with North Korean leader Kim Jong Un, which the White House hopes will lead to Kim giving up his nuclear weapons.

It names the president, sons Donald Trump Jr. and Eric Trump, and daughter Ivanka Trump, who were on the board of the foundation.

It seeks restitution of $2.8 million and the shutdown of the foundation, as well as a 10-year ban on Trump serving on the board of any other New York charity. A one-year ban is sought for his three children.

It also recommends the Internal Revenue Service to investigate the foundation – which provides Trump with an avenue for tax writeoffs – over tax violations, and that the Federal Elections Commission examine the case for breaches of campaign law.

“As our investigation reveals, the Trump Foundation was little more than a checkbook for payments from Mr. Trump or his businesses to nonprofits, regardless of their purpose or legality,” Underwood said.

“This is not how private foundations should function and my office intends to hold the foundation and its directors accountable for its misuse of charitable assets,” she also said in a statement.

The lawsuit paints a picture of habitual misuse of foundation funds for years, signed off on by Trump, who was president of the thinly staffed charity.

That included the January 2016 charity event which the Trump campaign, using the foundation, put on for veterans. About half the money raised, $2.8 million, was directed by campaign staff – not foundation staff – to be moved through the foundation to boost Trump’s image.

Other alleged abuses included providing foundation funds to a Florida political campaign; settling a 2007 lawsuit between the City of Palm Beach and Trump’s Mar-a-Lago resort, and settling a lawsuit by a golfer who took part in a Trump-sponsored charity event in 2012.

There was so little oversight of the foundation, the suit said, that its board has not met since 1999, despite legal requirements for an annual board meeting to review the foundation’s finances.

In a statement, the Trump Foundation defended its activities and said it had planned to wind up after Trump’s election but was held up by the New York investigation.

“Virtually every dollar donated to the foundation went to worthy causes, and helped any number of the most vulnerable among our citizens,” it said.

It also said the investigation was the brainchild of the previous state attorney general, Eric Schneiderman, who it said was seeking to bolster his own political future by going after Trump.   /kga