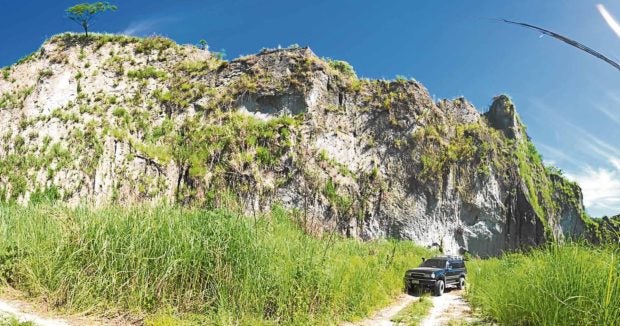 “Bagbag” (or forests in the Aeta language) tops that list, according to King, the elder of Barangay Inararo in Porac town.

The eruptions forced King and hundreds of Aeta people to flee. He settled back in Inararo in 2012 after living for five years in Nueva Ecija province and spending 15 years shuttling between the Villa Maria resettlement site at the foot of Pinatubo and climbing back to his home village to farm.

At Inararo, the village nearest to the volcano’s upper eastern flanks, King grows yams, bananas and sweet potatoes on land that is surrounded by ferns, “kakawate” and the water-rich “malakbe” (also called “aymit”).

But King, now 89, said he feared he would not be able to see the return of the verdant forests or benefit from their resources.

The government has done little to revive the forests on and around Pinatubo in Pampanga, Tarlac and Zambales provinces 27 years after the eruption.

No extensive reforestation was undertaken in the area that suffered from massive destruction.

The Aeta around Pinatubo have secured their ancestral land through certificates of ancestral domain title (CADTs).

In 2011, then President Benigno Aquino III initiated the National Greening Program (NGP), which covered forest lands and ancestral domains. Several endemic plants and animals have been recorded in the forests since.

The NGP prioritizes forest lands and ancestral domains and was to continue until 2028.

But between 2011 and 2017, trees were planted in only 1,098 hectares of land within the 7,471 ha covered by the NGP. These were at four of nine CADT areas, which span 90,147 ha, in the three Central Luzon provinces, according to reports of the Department of Environment and Natural Resources (DENR) and the National Commission on Indigenous Peoples(NCIP).

The government did not have data indicating how many tree saplings survived and whether all the trees were native to the areas.

The 1,098 ha are less than 7 percent of the 18,000 ha of forest lands buried under 25 centimeters of ashfall in the mountains of the towns of Porac and Floridablanca in Pampanga, Botolan and San Marcelino in Zambales, and Bamban and Capas in Tarlac.

No trees or only a few could have survived the eruptions, according to experts.

That means rains washed down the equivalent of 300 million dump trucks loaded with volcanic debris to the lowlands, according to the US Geological Survey (USGS).

A Japanese team monitoring the Pinatubo environment through satellite imaging concluded that rivers and areas near the top of the volcano were severely damaged, three weeks after the eruptions.

King said Pinatubo and five mountains around it should be reforested because it is the “lutan tua (ancestral lands)” of around 50,000 Aeta.

“The forests give water, food and medicines, a cool place to rest, a refuge during typhoons. A [land] title is not enough to call a land yours. You have to work on the land, make it productive,” he said.

King’s father, Alfonso, his sons Roman and Benzon, and his grandchildren have defended their ancestral domain.

The NGP did not enforce tree planting at Barangay Belbel, Burgos, Moraza and Villar in Botolan town, Zambales province, or over 20,567 ha controlled by the Aeta.

Not a single reforestation project was conducted in the 58,477 ha that NCIP listed as potential CADT areas around Pinatubo.

Inararo is part of the CADT covering 18,660 ha which extend to Porac and Angeles City in Pampanga and San Marcelino town in Zambales. The NGP planted on 3,420 ha there but reforested only 160 ha from 2011 to 2017.

Inaction on the reforestation needs of vast forests went against a 1992 recommendation by the National Economic and Development Authority for the Mt. Pinatubo rehabilitation program to “prevent future degradation of the environment and rehabilitate damaged ecosystems.”

A congressional accounting of the initial P30 billion allocated for rehabilitation showed that most of the funds were used to build dikes, bridges and roads in resettlement areas and to care for those displaced.

As it turned out, the NGP in Pampanga, Zambales and Tarlac concentrated on the purchase of seedlings of fruit trees, cacao, coffee, bamboo and timber which the government regarded as cash crops.

By comparing established plantations (the NGP term for areas planted with varieties of plants from 2011 to 2017), the regreening program covered more areas in the Sierra Madre mountain range (39,295 ha) than in Mt. Pinatubo areas in the Zambales mountain range (10,420 ha).

The DENR did not leave out Pinatubo in the NGP reforestation component, according to Arthur Salazar, the agency’s assistant director for technical services in Central Luzon.

“There was no such policy. There was no neglect,” he said, adding that the DENR had no problems with funds or personnel.

But the DENR had no say in the development of the Ancestral Domains Sustainable Development and Protection Plan (ADSDPP), which is drawn up by the indigenous peoples before the government recognized their ancestral domain through the issuance of a CADT. The plan would have included forest regeneration.

The ADSDPP, which is good for five years, is overseen primarily by the NCIP, as prescribed by the 1997 Indigenous Peoples Rights Act (Republic Act No. 8371).

Projects like NGP would have also required the free and prior informed consent (FPIC) of the IP community, said Ronald Daquioag, NCIP Central Luzon director.

“Any activity or implementation of plans and programs, public or private, within an ancestral domain needs the consent of the owner,” Salazar said.

Aeta people in Bamban and Capas towns had invoked their right to FPIC in February and March 2018 before NGP could be implemented in their areas, according to letters transmitted by Labay Ku chair, Jerry Diaz, and village leader Lito Diaz.

Judelyn Francisco, NGP assistant regional coordinator, disagreed with Daquioag. The FPIC, she said, was not needed when programs and projects were “solicited or initiated by indigenous peoples strictly for the delivery of basic services or livelihood.”

This provision was the basis for undertaking the NGP in CADT areas around Mt. Pinatubo, she said.

“The areas to be planted are identified through survey mapping and planning. We also check if planters have tenure on the land through CADT or contracts with government. We determine what seedlings are suitable to grow in an area. Is the area accessible? If it is not, planting, monitoring and caring for the trees would not be easy,” she said.

The thickness of volcanic debris will sometimes determine whether the government should plant or not.

“But the soil is rich now. Regrowing the forest can be done,” King said.

He said reforestation should be done by credible peoples’ organizations or village councils because they have to account for public funds to be used to buy seedlings, build plant nurseries or pay workers.

The Aeta prefer to plant cash crops, said Benzon King, barangay chair of Inararo. Reforestation took a backseat because the Aeta planted 50,000 seedlings of guyabano, rambutan, jackfruit, mango and tamarind on a 250-ha lot in 2015 to augment their income from farming, King said. About 70 percent of the seedlings survived, he added.

But the Aeta may have to consider reforesting without the NGP program.

A 2016 Commission on Audit (COA) report said the “sustainable management of completed NGP projects has been put at risk due to lapses in the implementation of guidelines on the process of awarding through bidding for long-term development of NGP areas and non-execution of contract or MOA (memorandum of agreement) between the DENR and [indigenous peoples or local governments] for the continued plantation maintenance and protection activities of NGP planting sites.”

The COA also said the program had no third party to monitor and evaluate the NGP.