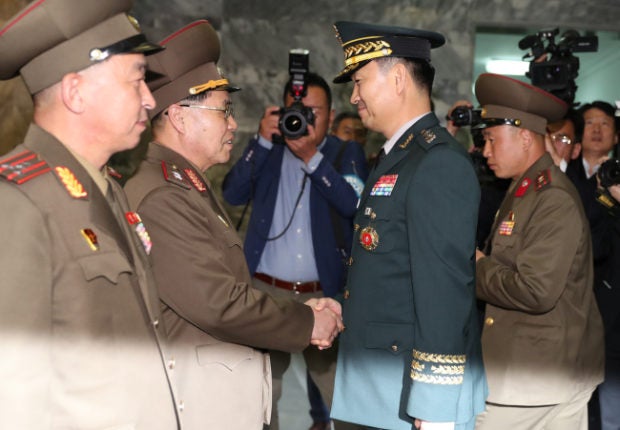 The two Koreas on Thursday held high-level military talks at the North Korean side of the heavily fortified Demilitarized Zone, in a bid to implement the inter-Korean summit agreement aimed at ceasing cross-border hostilities and eliminating dangers of a war.

The meeting, which was held for the first time since 2007, started at 10 a.m. at a North Korean building inside the truce village of Panmunjeom. The two sides entered Panmungak simultaneously after South Korean delegates crossed the border at 9 a.m.

“Of all those in uniform from the two Koreas, I think Maj. Gen. Kim is the first military officer to cross the border. … I’m very jealous,” An told Kim. “Kim should go down in history by setting a Guinness World Record for the history of the unification.”

“I believe there was a headwind against us and that was the reason why it took so much time for us to meet each other. I sincerely hope that our meeting will become a tailwind,” he added.

Describing his attendance at the meeting as a “great honor,” Maj. Gen. Kim replied that he hopes the military talks would become an opportunity to lay the groundwork for peace and stability on the Korean Peninsula.

The meeting is part of efforts to fulfill the Panmunjeom Declaration adopted after the inter-Korean summit in April, when South Korean President Moon Jae-in and North Korean leader Kim Jong-un proclaimed “there is no more war on the Korean Peninsula.”

The joint declaration calls for the two Koreas to completely cease all hostile acts against each other in every domain, including land, air and sea. In that vein, the two sides pledged to transform the Demilitarized Zone and waters close to North Korea into a “peace zone.”

“The consistent theme of the Panmunjeom Declaration is the spirit of self-reliance (between the two Koreas). In order to honor the spirit, we need to proceed with the meeting at an incredible speed and keep the principle of respecting each other,” said An.

The rare inter-Korean military talks came amid hope and caution over the prospects of inter-Korean relations. While the risk of an armed conflict has been dramatically reduced, concerns persist over whether there had been too much concession to North Korea through a series of summits.

Sparking the controversy was President Donald Trump’s remark on suspending joint “war games” with South Korea after holding a historic summit with Kim Jong-un on Tuesday. CNN reported Wednesday that the US would announce its plan to halt the joint exercises as early as Thursday, local time.

South Korea and the US were planning to hold a large-scale computer-simulated joint drill this August. The Ulchi Freedom Guardian exercise includes computer simulations carried out in a large bunker south of Seoul, intended to check the allies’ readiness to repel aggression by North Korea.

“There is close coordination between South Korea and the US over the issue” of suspending the Ulchi Freedom Guardian exercise, said Choi Hyun-soo, a spokesperson of the Ministry of National Defense.

The presidential office Cheong Wa Dae on Wednesday hinted at the possibility of suspending the joint exercise as a trust-building measure with North Korea for denuclearization process.

Asked if there was prior consultation between Defense Minister Song Young-moo and his US counterpart Jim Mattis, Choi declined to comment. Mattis was reportedly notified about a plan to suspend the exercise before Trump made the announcement in Singapore after his meeting with the North Korea leader.

South Korea’s Joint Chiefs of Staff, meanwhile, said there was still “no indication” of North Korea shutting down its missile engine test site, a pledge that Trump claimed Kim had made during their meeting.

“There are some locations that we closely watch with much interest,” said an official from the Joint Chiefs of Staff, who requested anonymity, citing office rules. “But we can’t reveal specific locations because they are (classified) intelligence on North Korea.”