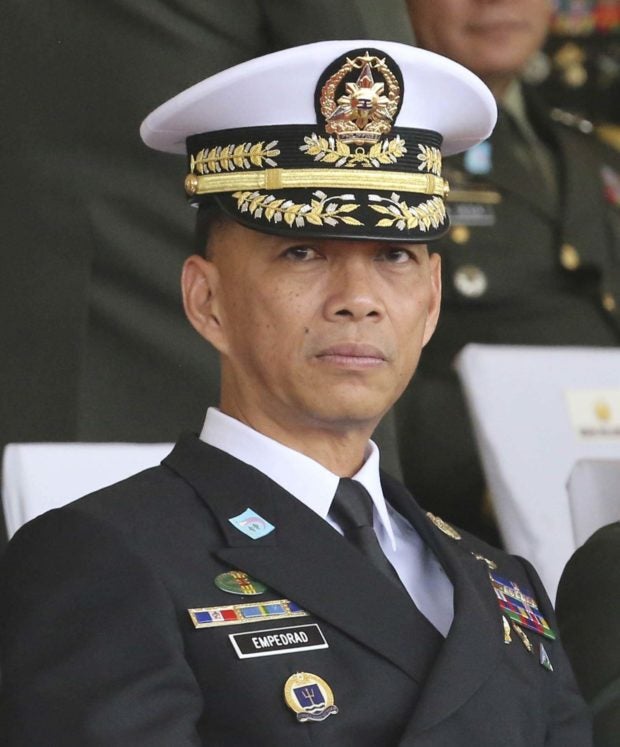 If Philippine Navy chief Vice Admiral Robert Empedrad had his way, he would have wanted to prioritize the acquisition of submarines amid the rising security challenges in the region.

“Tuloy-tuloy naman ang acquisition natin…Na-approve din sa second horizon ang two corvettes and six offshore patrol vessels. We are acquiring lots of ships and capabilities but more importantly we wish to acquire submarines because it is a strategic deterrence to other foreign navies,” Empedrad said in an interview with military’s radio station DWDD on Wednesday.

“If they know you have submarines, they will start to respect the Philippine Navy,” he added.

The Navy chief was asked what he would have wanted to be included in the second horizon of the military modernization program, which is from 2018 to 2022.

On Monday, Defense Secretary Delfin Lorenzana said the acquisition of diesel-electric submarines would take place on the third horizon of the modernization program, which will be from 2023 to 2028.

The defense chief said they are looking for potential suppliers as early as now as construction takes up to 10 years. He also stressed that several of the country’s neighbors already have submarine capability.

Empedrad said they already have created a submarine group ahead of the procurement.

“We are sending people outside the country in preparation for the acquisition. It takes 7 to 10 years,” he said.

The Navy is expecting two missile-capable frigates that have anti-submarine warfare features in 2020. The expected delivery of the first frigate would be by March 2020, Empedrad said.

Two anti-submarine warfare helicopters with torpedoes are also expected to arrive by March 2019, he added. /kga