No Kadamay takeover this time 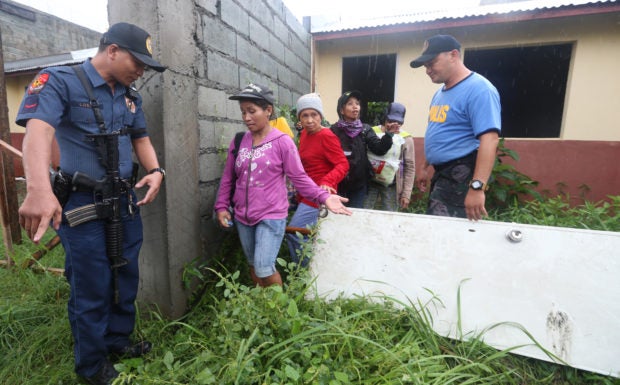 WAY OUT Police officers lead Kadamay members out of the house they occupied early Wednesday at the police-military housing site in Barangay San Isidro, Rodriguez town (formerly Montalban). The urban poor group said it wasmerely “guarding” the unoccupied units that they were
hoping to occupy. —EDWIN BACASMAS

Members of an urban poor group on Wednesday trooped to a housing project intended for police and military personnel in Rodriguez (formerly Montalban) town in Rizal province, but were driven away by local policemen.

About 500 members of the Montalban Homeless Association (MHA), a local chapter of the militant Kalipunan ng Damayang Mahihirap (Kadamay), stormed the La Solidaridad-Avilon Zoo housing project, in what housing officials said was an attempted takeover of vacant units at the site.

Most of the association members who went to La Solidaridad were women, some pregnant or mothers with children in tow, who sought shelter from rain outside the subdivision, said Supt. Pablito Naganag, Rodriguez police chief.

The group claimed there were around 700 of them, more than the police estimate of only 100.

Kadamay, which was behind the takeover of government housing projects in Pandi town, Bulacan province, and Rodriguez last year, said they only meant to assert their rights to decent housing as stated in the Congressional Joint Resolution No. 2 (JR No. 2).

Police reported the Kadamay members had dispersed by early afternoon, according to Elsie Trinidad, spokesperson for the National Housing Authority (NHA).

Kadamay denied its members tried to  take over of housing units intended for members of the Armed Forces of the Philippines and Philippine National Police.

But the group said the AFP-PNP housing project had been left idle for the past five years.

“That’s why it’s called ‘Bantayang Bahay’ because we only meant to guard our rights over the houses,” said Kadamay national chair Gloria Arellano.

The NHA denied Kadamay’s claims, saying the housing units that the group tried to overrun in Rodriguez had already been awarded.

These, however, may be unoccupied because their owners, mostly police officers, are deployed to other areas, Trinidad said.

She, however, did not say how many of the 715 houses had been awarded or actually occupied.

Kadamay said its members merely staged a “peaceful protest” to assert their right to shelter and to condemn the “continuing flaws” of the Philippine housing program.

They expressed concern over the delays in the implementation of JR No. 2, which mandated the NHA to distribute unawarded, unoccupied or relinquished housing units intended for enlisted military men, police, jail and fire personnel.

“At its core, Kadamay says that there are still so many idle houses and so many homeless, even with the joint resolution already in place, the poor are left unheard and victims to the ploys of those in power,” Arellano said.

JR No. 2, which was signed by senators and congressmen, on May 9 gave the NHA 60 days to formulate implementing rules and regulations for the houses.

Arellano said that even before the signing of JR No. 2, MHA and Kadamay members, most of them scavengers in the nearby landfill, had long applied for the units at the NHA.

They submitted all the required documents and have gone back and forth talking with the NHA for over a year, she said.

She said the municipal government was giving priority to some people who were not even poor or a resident of the town.

Kadamay alleged that the NHA and the local governments of Rizal had been using idle housing sites supposedly for “political patronage and leverage,” while allegedly delaying on purpose the granting of applications for the homeless.

Rodriguez Mayor Cecilio Hernandez said the local government was only given “10 percent” of the total housing units at its disposal, but the selection of the beneficiaries remained mainly the responsibility of the national government.

The delay in the implementation of JR No. 2 has been aggravated with the onset of the rainy season this month, flooding many of  temporary homes of the informal settlers, Kadamay said.

The group also complained about the allegedly high amortization rates imposed on their members for houses that had been awarded to them.

The NHA has complied with the directive of the President, and was in the process of finalizing the guidelines, according to Trinidad.

But based on NHA screening process, many of the Kadamay members would be disqualified, as some of them were found to be either financially capable of owning a house, or do not belong to the poorest sector, she said.

“We found out that some of those who earlier applied for separate housing units were actually entitled to just one unit. Some were even renting out their declared houses,” Trinidad said. —With a report from Maricar Cinco