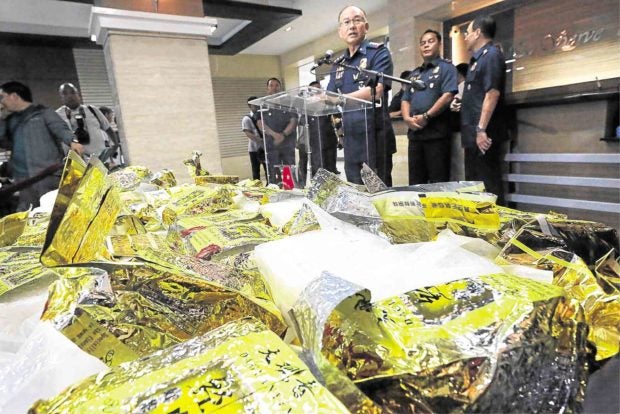 SPECIAL TEA While the packaging says “special selected and processed refined tea,” the contents are anything but your ordinary, run-of-the-mill tea blend. The police suspect the 24 kilos of “shabu” seized from four people on Wednesday are from China. —GRIG C. MONTEGRANDE

Four people, including a 61-year-old woman and her son, have yielded some 24 kilos worth of “shabu” (crystal meth) packaged as special and refined Chinese tea, in police operations conducted in Caloocan City and Manila.

“There are Chinese characters on the packaging. It is starting to look that the source was really China. We do not know from which region. But by all indications, the markings and all, it seems they came from China,” Albayalde said in a press briefing at Camp Crame on Wednesday.

The PNP was coordinating with the Bureau of Customs regarding the matter, Albayalde said.

First to fall were Luzviminda Basilio and Jocelyn Santos, who were arrested on Tuesday in front of Manila Central University campus on Edsa in Caloocan City after they allegedly sold 20 grams of shabu to an undercover policeman.

When interrogated, the pair pointed to Ruby Calabio, 61, and her son Ian Akira as their supplier, leading to a follow-up operation the following day that resulted in the Calabios’ arrest in their house in Sta. Ana, Manila.

Searching the house, the police found some 24 kilos of shabu kept in a suitcase.

Albayalde noted that the drugs were in packages marked as “special selected and processed refined tea,” which he took as an indication that they were smuggled into the country.

The PNP was also investigating whether the shabu was smuggled into the country before or after last year’s discovery of the P6.5-billion drug shipment at warehouses in Valenzuela City.